Share All sharing options for: Dub Davis To Lead The Dram's Cocktailing Team 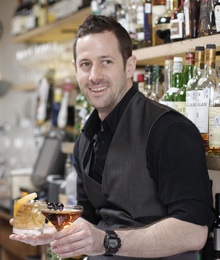 Late last night Dallas nightlife empresario Tommy DeAlano sent round an e-mail announcing details on his new joint The Dram on Henderson Avenue, which we first told you about in August. Back then, DeAlano told us only that it'd be an "after dinner cocktail bar." Now, we know that the highly skilled Dub Davis, he recently of the Marquee Grill & Bar and a 2011 Eater Award nominee, has signed on as bar manager at The Dram.

DeAlano tells us the Dram won't serve food, but "we will partner with local restaurateurs and food trucks from time to time."

In a press release, DeAlano writes of Davis: "He has the perfect blend of passion, timeless technique and a quality guest service approach that enables him to not only craft great drinks, but also build long term relationships with clientele."

Read on for the whole shebang:

DALLAS (November 28, 2011)???The Dram, a unique concept by DJ Donohoe, Chris Donohoe and nightlife operator Tommy DeAlano, will be located in the historic 2918 N. Henderson building, formerly the Wooden House. Filling a gap in Dallas' nightlife scene, The Dram will offer a sophisticated, yet approachable experience for a clientele previously limited to pub or nightclub options. The Dram will serve handcrafted cocktails using a simplified approach to classics creating a balanced drink menu with nightly and seasonal specialty libations. Whether for an after dinner cocktail or an entire evening out, the impeccable service, energetic vibe and timeless décor, will give patrons an opportunity to enjoy socializing to an eclectic playlist in a true cocktail bar. Opening Soon?

“We are very excited to announce the hiring of Dub Davis as our Bar Manager,” said Tommy DeAlano. “Dub is a true find in the Dallas cocktail movement. He has the perfect blend of passion, timeless technique and a quality guest service approach that enables him to not only craft great drinks, but also build long term relationships with clientele.”

About Dub Davis?Honing his skills working next to the likes of Eddie “Lucky” Campbell, Michael Martensen, and Jason Kosmas, Dub has been able to establish himself as a proven innovator within the Dallas service industry. Combining “market fresh” flavor profiles and an extensive knowledge of classic and modern cocktails, his work has helped form some of Dallas’ most innovative cocktail programs.

We're wondering if this "filling a gap" thing is a dig at other cocktail bars--after all, the Cedars Social is "sophisticated yet approachable," not to mention, say, the Black Swan Saloon. Then again, it might just be "filling a gap" in DeAlano's ownership portfolio. What do you get for a man who already owns a bottle service club, a lounge and a high-end restaurant? Why, a cocktail bar of course.

· The Dram [Official]
· All The Dram Coverage On Eater Dallas [-EDFW-]

Oh hey, Dub, didn't see ya there. Carry on. [Photo: Courtesy The Dram]