Share All sharing options for: Amanda Terilli Ahern Is Back To Beloved At Terilli's

This is The Gatekeepers, in which Eater roams the city meeting the fine ladies and gentlemen that stand between you and some of your favorite impossible-to-get tables. This installment: Amanda Terilli Ahern of Terilli's Restaurant 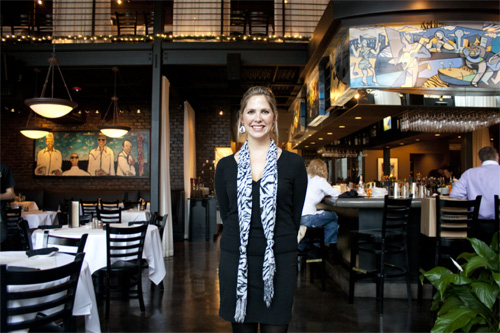 Terilli's on Lower Greenville has been a known name for more than two decades -- and well beyond the close-knit neighborhood. The family-run Italian restaurant has been a go-to for daters, jazz musicians, politicians, athletes and even Hollywood elite. In March 2010 a fire took essentially everything but the facade of the Dallas landmark and the neighboring tenants on the half-block strip. The future of Terilli's was uncertain.

After renovating and refocusing, Terilli's reopened three short months ago, with Amanda Terilli Ahern right back in the thick of it. Her official title is managing partner, special events, but when we sat down with her for a chat about what it's like to manage the insanely popular Greenville Avenue phoenix, it was evident she does most everything --from running plates to booking music to hunting down answers for vendors to answering phones to taking reservations to teasing regulars to honestly, the list keeps going.

With a steady drizzle dampening the air, she's all smiles: "People love pasta when it rains! So we will be busy!" But even while she sits and talks about Terilli's rebuild, she's ready to dart to the next issue or task and take care. It speaks to the energy of Terilli's itself. While many restaurants find it difficult to last much longer than a year, this one couldn't stand to stay down so long before it was ready for that satisfying line out the door.

How long have you been with Terilli's?
I started working here when I was 13 as cashier. So I probably worked here for a year, and then I went to college and came back in '04. So I've been with the family since '04. My mom [Jeannie Terilli] owns the restaurant. She started it 25 years ago.

How long have you been in the hospitality/service industry?
I guess you could say my whole life, because my dad and mom also owned Cardinal Puff''s [now Ozona Bar & Grille] so I was -- illegally, but in the '80s, you know, they didn't really care, the TABC. I was serving cocktails and hosting and I was like, eight years old at Cardinal Puff's. It just didn't matter.

After the fire and rebuild, you reopened on September--
September 1st.

And when did the first pre-fire regular hit the doorstep?
September 1st. [Laughs]

Seconds after the doors opened?
Yeah. We did cocktails on the 1st and then we were officially open that Friday. The news got ahold of it and we had a line out the door and we had a three hour wait on our very first night open. So it was chaotic. New waitstaff, new kitchen, everybody trying to learn the drill and learn the routine. It was definitely a learning experience that night.

Incredibly invigorating too, though, yes?
Very! And we had mainly regulars that night. We had mainly people who had just missed Terilli's for the last year and a half.

There must be nostalgia given all the Halloween and New Year's blow-outs, the proposals you've seen on Valentine's Day...
We've actually already had about eight proposals. We had one opening night, then two last weekend. People are proposing on bricks, too, which is kinda fun. They're buying a brick for the wall and then they'll walk the girl by it and they'll propose. Like they'll say, "Oh, look at this! What's this brick?" And it'll say, "Will you marry me?" There's one in there right now, it's pretty cool.

Actually, Terilli's was always a bit of a holiday, or special occasion, destination. Is that still the case?
I think, right now, it's just a destination for people because it is back, it is new. We, of course, are busier during the holidays, but we've been pretty busy since we opened the doors. It's been good.

Celebrity guests. What do you differently for them?
We make sure they get a good table. We make sure that nobody bothers them. We try to put them in a place that's kind of in the corner so that they're not the center of attention whenever they come in.

Who's better to serve: athletes or movie stars?
We used to get, but we have not gotten a movie star in since we've opened. But we've gotten Michael Young and Ian Kinsler from the Rangers; they came in. So far, my staff really enjoys the athletes.

How key is live entertainment to the Terilli's experience?
It's extremely important, but what we do tell our musicians is that they are the side dish, they are not the main entrée. People come here for the food, and also the entertainment. [The musicians] like to get a little loud sometimes. Back in the old Terilli's it was too loud so people wouldn't come here anymore because they said they couldn't hear their own selves talk. So the live music is very important but at the same time it is the side dish to our restaurant.

Is your entertainment focus on jazz, as it was with the old Terilli's?
We kind of shifted our focus more toward live music in general. We noticed the public is more interested in today's hits or jazz standards so we actually hire people that can do a little bit of everything. And it is more piano-vocals.

What thoughts do you have, working a shift on a typical day like today?
The main thing that we focus on is the continued support from our neighborhood and from all of our friends and family because we definitely would not have reopened if wasn't for them. They were our drive and they were our motivation. For sure.

For more Gatekeepers published today from across the Eater Universe, head over to Eater National.