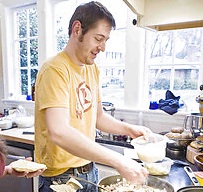 They're small, but they're mighty: photos of Dallas Observer food critic Scott Reitz, hipster dreamboat, making adorable food for his adorable friends in adorable Alexandria, VA., and writing all about it for the Washington Post, which illustrated the piece with photos of none other than, you guessed it, Scott Reitz. The premise of his piece: how to invite your bros over for food without being kinda, you know ...

Approaching a bunch of single guys straight out of college with the prospect of a dinner party was awkward at best. Besides, Friday nights were for cabs and bars and house parties whose only culinary attraction might be a sheet pan of Jell-O shots.

His solution? "If I was going to cook for my friends, I was going to have to find another pull, so I started inviting them over for football." Happy for us, the rest is photographically documented history.

UPDATE: Reitz confirms that Eater Dallas has nailed him. Also, that we did him a solid with our Photoshop skills: "thank you for at least cropping out my wife."