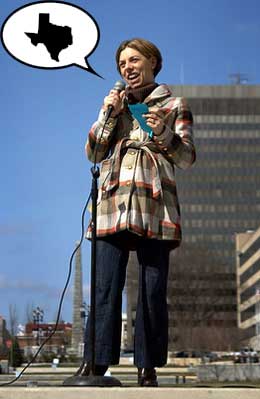 Former Dallas Observer food critic Hanna Raskin wasted little of her time--or words--in Dallas, leaving the city after less than a year at the alt-weekly for the cloudy climes of Seattle and the Seattle Weekly. Before hastily packing her bags, she did take the time to call Dallas a "dining nowhereville." She did not, as it were, let the door hit her on the way out.

Lest Dallas forget what an atrocity its food culture is, Raskin reminds us today on a Seattle Weekly blog that even professional food criticism can't save us from ourselves. In a post about the "imagined relationship between rigorous professional criticism and good food," she writes:

I moved here from Dallas, a city that's covered ruthlessly by established food critics, including the Dallas Morning News' Leslie Brenner, D Magazine's Nancy Nichols, and Texas Monthly's Pat Sharpe. The food there isn't any better for it.

The subject of her post is Portland, a city which has "entered the post-professional critic era, and the food scene hasn't suffered." Unlike Dallas. Which suffers.

Raskin spends so much time talking about Texas at her new gig that our friends at Eater Seattle even made this fun graphic. [Photo: Eater Seattle]