This is The Gatekeepers, in which Eater roams the city meeting the fine ladies and gentlemen that stand between you and some of your favorite impossible-to-get tables. This installment: Gina Gottlich of Bijoux 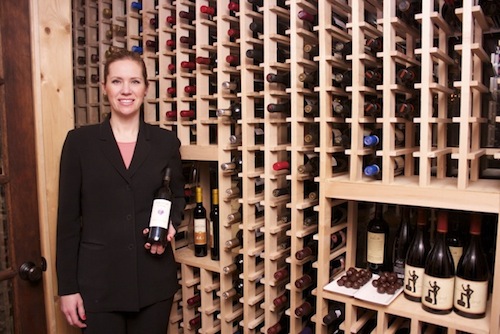 On a corner of the back side of Inwood Village you'll find Bijoux, an upscale French restaurant that's elegant, quiet and possibly intimidating ... if it weren't for Gina Gottlich, sommelier and restaurateur. Since 2006, Gina has run Bijoux with her husband, chef Scott Gottlich, earning a nod from Bon Appetit that same year as one of the Top 10 Hottest New Restaurants In America. While it's no longer "new," it's still quite the destination.

During any given service, you'll find Gottlich suggesting wines and generally working the floor -- tending to events that range from romantic dates to huge celebrations. Some customers flit back and forth from the full bar at Bijoux to Rise No.1 next door and back, but there are regulars, like former Dallas Cowboys linebacker and Super Bowl MVP Chuck Howley, for whom dinner at Bijoux is the only goal.

Of course, a special occasion restaurant comes with its fair share of drama, but when we sat down with Gina to discuss her Bijoux experiences, she made it clear that the drama -- no matter if it's a lovers spat (someone else's, of course), picky children's palate or special requests -- is still part of the fun of working in a restaurant she and many others adore.

This is almost six years for Bijoux. Does it being a family business make the job easier or more difficult?
I'd say it's probably easier. Not only is it my husband and I, who are obviously related, but the whole restaurant is kind of run as a family business. It's very team oriented. I'm working tonight as a captain for one of our captains. We're always willing to come in and help each other out and do things for each other, so I think that it's definitely better. The whole thing stands out in my head more as "Everyone works as a family here."

When you come in, day to day, what do you consider your main challenge? Customers? The business side?
I don't think that I could really say that there was one thing. Generally, in the past, the most difficult thing for us has been the right people, the right staff. If I had to say something it would be that, but I think that we've been very lucky and we have great people that work with us.

It's definitely not the customers. We don't take that stance at all. It would be hard to say that there was one thing, because that's not even that challenging. In general, this restaurant is just very easily run. It kind of has its own heartbeat. We definitely have been pretty stern from the very beginning that this is our vision and this is how we want it to be and we've followed true to that and so know it really has taken on its own personality. And it's not like "Oh my gosh, I go to work." I'm sure everyone would rather be sitting, watching their favorite TV show rather than working, but to go to a place where you don't mind it and it's kinda fun and everyone has a good time and you make a decent living... It would be hard to say that there are any standout challenges.

With you being the wine guru here, do you much research for wine pairings?
I've done so many wine pairings that I kind of know what direction I go into, but the number one thing with wine pairings - and I don't know if my colleagues would agree with me or disagree with me - but for me, the number one thing is you have to try it with the food. I don't care if a sauvignon blanc goes with goat cheese, or whatever the traditional wine pairing is, you just have to taste it first, because you just never know. And 90 percent of the time you're right, but -- and not only do I think that's like the bare minimum of doing your job is tasting it and knowing that it's good - but you're also much more confident about it. It really benefits you in being able to say, "The turnip in this brings out the earthiness in the wine," or something like that. It really is a no-brainer.

Are we still in an age where people name-drop to get to get a table or a reservation?
No, but we've learned that everyone, including ourselves, wants to feel special. Before it was, "Oh, I know your uncle from so-and-so and so-and-so and so-and-so." [Now,] it's not like name-dropping like they want to get something out of it, but they just want to be like, "Oh, you know my uncle - that's so wonderful!" just to feel important and like we have the same acquaintances.

What's the most memorable customer experience you've had - rewarding, funny, anything - if you can even narrow that down?
Ohhhh... There are some that are so shocking I can't even tell you in an interview and those are the ones that definitely stick out in my mind the most. Gosh, I don't know - we are definitely a special occasion restaurant so we get big anniversaries and 90th birthdays and 50th wedding anniversaries. Those are always so cute because, I mean, they're like 92 years old. We had, I think, a 60-year wedding anniversary and they come in and you're just like, "Oh my gosh, what?! Not only are you alive and walking and well, but you've actually been married for this long?" It's unreal. And then children and the grandchildren and the great-grandchildren - it's so nice to see all the generations.

That has to inspire you, especially working with your husband.
Yeah, it's touching. I kind of enjoy the fact that - wow, they picked our restaurant to come in for such a special occasion. This isn't just your average birthday or a job promotion, you know, these are big events for people and they're counting on us to make it special. That stands out to me.

So, I know you work with dog rescue and you and Scott have two children -- who gets more excited about Bijoux doggie bags, the kids or your rescue dogs?
That's a good question. From the restaurant? We used to give the dogs some of the leftover stuff but it just made them sick - they weren't used to it. So we don't do that anymore. And the kids won't eat anything from here.

What? No.
I know. It's so funny. Before we had children it was, "Oh, you're married to a chef, how wonderful that must be. You're so lucky." No. We don't. We cooked at home like once a month and people couldn't believe it. And now we have kids, they're like, "You're kids must eat so well." I'm like, no. If we let them they would eat McDonald's seven nights a week, macaroni and cheese, buttered noodles.

One of our regulars said, "The cobbler's kid has no shoes." [Laughs.] I'd never heard that saying before then... but it's true.

In a weird way, that sort of leads to our next topic. More and more, people are more open with special diet restrictions and requests. Being a special occasion restaurant, is that a fun challenge for you and the kitchen staff?
It's definitely challenging, but it is nice because a lot of times these people come in and they say, "I'm so sorry but I can't have gluten," and then Scott will bend over backwards and make this awesome gluten-free chef's tasting menu and it's the best. Because if they can't have gluten they can't go out and really enjoy things like other people can, so to have him cook this wonderful meal for them is really special.

I remember we had these two vegans that came in and it was their 25th anniversary and we told them we could do a nine-course vegan, or something of that nature, and they were just like they had just won the lottery. It's things like that. It's challenging so it's not like we're excited like, "Oh great! Everyone's coming in tonight that's gluten-free!" But it is nice because it really does make their day.

Talking about anniversaries and big events, have you ever had to break up a "scene"?
No, but we sometimes get arguments. You know, they'll be sitting there. And it's quiet - the restaurant is very quiet by nature. And it's so funny, too, because you can't help but think that something's wrong with the meal. They're sitting there and everything's totally fine and everyone's happy, and then they get to their entrees and she hasn't eaten a bite. You ask how everything is - "Everything's fine." And you're like, it can't be fine you aren't eating anything. And they're not talking and you're like oh, my gosh, what's going on? Did I forget to modify, did I forget to do this? And then someone else will overhear them and he'll ask for the check real quick and she'll storm off. And it's always the girl. The girl storms off, then the guy.