Welcome to One Year In, a feature in which Eater sits down for a chat with the chefs and owners of restaurants celebrating their one year anniversary. This installment: Jeana Johnson and Colleen O'Hare of Good 2 Go Taco 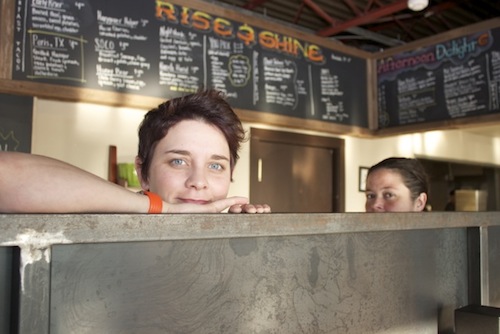 Jeana Johnson and Colleen O'Hare. [Photo: Merritt Martin/EDFW]
The lines out the door at Good 2 Go Taco never seem to disappear until the doors are locked. After leaving their first digs inside the Green Spot a few streets over, Jeana Johnson and Colleen O'Hare celebrated one year in the space on Peavy Road on January 13. It may have been twelve months, but the pair is still amazed by the neighborhood's welcome, their success and the demand for more tacos.

Oh, and that just two months after sharing their skills and kitchen with Goodfriend next door, they're broadening their scope and impact on Dallas dining yet again.

What's been the biggest Good 2 Go milestone this year? Aside from hitting one year, that is.
JJ: You know, I think looking back at the last year, just seeing our staff develop, how amazing they've become. How just like a brick wall they are - unwavering, amazing, just ready to handle the total ass-whooping every single day. That's so huge.

Everybody sort of talks about success in dollar amounts or record sales or whatever. It's sort of like - I guess we look at everything from the back end of things: good food, take care of your neighborhood, have a kick ass staff. The money will work itself out. You don't set sales goals and all of that hoodoo voodoo. You treat people really well and you become reliable to the customer.

Colleen O'Hare: It was more grown out of commitment to the neighborhood and providing a service that doesn't exist. Proving that, we have 27 employees so we support 27 families. That feels good at the end of the day to know that we can do that.

Speaking of supporting the neighborhood, when was it that you really fell in love with using local, sustainable ingredients? Was it in training or was it gradual?
CO: I think it just came about from where we've worked...

JJ: Yeah, there's definitely been a lot of positive influence. We've chosen to work with really amazing people. But, for me personally, I can recognize quality because I didn't start at the greatest restaurants and there's a difference with everything. You know, like, you have your first glass of wine and I promise you it's not going to be a '64 Latour, it's gonna be some sort of boxed wine and then you're gonna move into "Hey, this doesn't have a screw cap," and then you'll move into "Holy shit! This is why people collect this stuff!"

It's the same thing with food quality. You sort of start out cooking at those places where steak comes in a Cryovac-ed package.

CO: And it was almost like a backlash for us out of so much fine dining. We were making all this stuff with amazing ingredients, but nobody can come eat it. None of our friends can come and eat it because they can't afford it.

JJ: Not that we have poor friends! [Laughs.]

CO: No, but you can't come eat that kind of food every day. So how do we provide that to everyone every day? You know? Why does it have to be a special occasion?

JJ: You look at Restaurant Week and tell me that people aren't interested in eating at all these places but don't have the finances for it.

For Good 2 Go, you took that and made it hand-held, affordable and really addictive based on the lines out the door every day. How many people do you serve in a day?

Is that 500 tickets per weekend or each day?
CO: Per day. One of the cooks back there right now - you know we're always looking for new cooks and we're opening a new place - I asked his friend and he was like, "No way, I heard you guys are busy. You're too busy."

JJ: And it was tough to do sort of a per-person because a lot of our customers at the Green Spot we didn't see. We kept the potato, and cheese and bacon, egg and cheese up front at the cashier's stand. So the first crack off the bat they'd come back there and be like, "We're out of tacos." And I'd be like I haven't seen a single person.

CO: And we made four hundred - where did they go?

So have you had the "Oh, shit!" moment of realizing you're doing well and loving it?

JJ: We'll never settle. We'll never rest. We'll never say we've hit this stride and we're totally happy with where it's at and we'll continue pushing really hard. I think once you stop doing that, it takes a little honesty out of you.

It's like any relationship. If you get comfortable enough with the partner you're with, they'll get real tired of your shit real easy. It's the same thing with our customers. If they don't see us in here trying and busting our asses...
I want to see them here. There's never any "Oh, you again?" It's not an act, it's joy. Like, I can't believe they're back!

How do you deal with people worried they won't get a seat because Good 2 Go is packed?
JJ: We encourage community dining. We know about half the people, so if you're here by yourself I'll [make an introduction]. We've had more people create friendships -

JJ: There's a reason we only have eight tables. That cashier stand is about four times as big as it needs to be, but we wanted our dining room to be small. Just big enough. It's by design. The tagline is "Just get in where you fit in." It's about that.

Who comes up with the names for the tacos?
CO: [Jeana] does. I occasionally have a moment of inspiration.

JJ: My favorite name is Chuck Tailored. That was Colleen.

CO: It's funny to see people who've never been here before. It's like "What are we reading here?"

Are you going to physically be here and there once it opens?
JJ: Yes.

For shifts! I mean for shifts!
CO: We'll probably do some of that.

JJ: We make a really amazing side-by-side team. We read each other's minds.

What made you pick the new space?
JJ: It just sort of came up. We weren't really looking for anything. We weren't really saying, "I know! We just opened a place [Goodfriend] two months ago, we should knock the dust off and get out there again." But it was just too good of a deal to pass up.

That building was on the watch list. Any chef/owner will tell you they have at least one building they're watching. And if that building ever comes up - I don't care when it is, I gotta go, at least, look at it.

You're so incredibly busy. When you fantasize about vacation now, is it a far away place or your couch?
JJ: Definitely a distant place. No question. We went to Vietnam in April. We opened Good 2 Go Taco January 13, 2011. We left the country for three weeks April 15th.

So you have no problem heading out?
CO: Oh, no, we had a problem doing it. We had people force us into it.

JJ: You know I called like a nervous mother for the first couple days. "Did the produce order come in?!" and all that. But then geography and cell phone coverage --

CO: We were cut off.

JJ: It was like divine intervention. We don't need to go anyplace were there's a lot of technology. Someplace where they don't have cars.

Did you take any of Good 2 Go with you?
JJ: Actually, yeah. I have a picture of a little boy on a bicycle with a Good 2 Go Taco sticker on his bike.

CO: We passed out stickers in all the villages.

For more One Year In posts published today across the Eater Universe, head over to Eater National.