This is One Year In, a feature in which Eater Dallas sits down for a chat with the chefs and owners of restaurants celebrating their one year anniversary. This installment: Jay Jerrier of Il Cane Rosso. 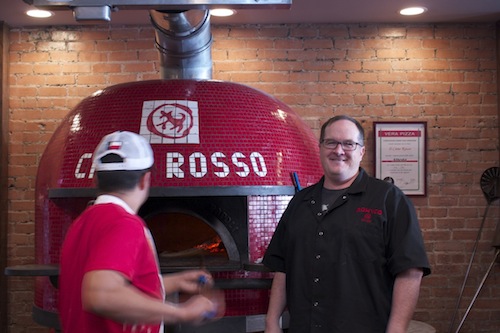 His pizza-eating experience in Naples had stuck with him and he had to make a change. He had to bring the flavor to Dallas, not just via his successful pizza trailer, but brick-and-mortar style.

Since then, customers have waited hours for a table, chefs have competed for his oven space, and the restaurant has expanded. It's been a good year, and it's all only growing from here.

Many restaurants just celebrate lasting one year, but Cane Rosso has actually expanded in its first year.
I say we've lasted too, just because it's exhausting. I was telling someone at carpool this morning that one year has seemed like 10.

And you do carpool!
Yeah, I have a lot of bits going on outside of work.

But yeah, I have a good team, between Megan [Dennison], the GM, and Matt [Reddick] in the kitchen, and Dino [Santonicola] and the rest of the pizza makers, that I can actually disappear from time to time and get out of here. I'm not here; I'm not making one hundred percent of the pizzas anymore. But I still make a lot of the dough.

But you did make it all for months.
Oh, until Dino got here at the end of September I was pretty much for every shift lunch and dinner. One year here seems like 10 years at GE, my regular, old career. But now it's nice. I work a lot harder and get paid a lot less than when I had a corporate job, but you know, now I don't have to travel, I get to do stuff with my kids. You know I drop off my kids at school every single day. I drop them off every day at carpool and on Thursday I go in and make pizza with my kindergartner and I coach my 9-year-old's girl's lacrosse team. It's really fun. I don't miss any of that stuff.

We've survived too. There's been a lot of ups and downs. It's been challenging. It's been really challenging. The restaurant business is really difficult. Everything that could go wrong did go wrong. Heating and air, the grease trap, the POS system goes down, power outages - all these unexpected things happen all the time.

In this first year, though, there are two major things we associate with Cane Rosso - Celebrity Chef Nights and the expansion. Let's start with the chefs. How did that come about?
We were opened really limited hours when we first opened. Thursday, Friday, Saturday. Then expanded to Wednesday, then to Tuesday. Then as we started to get, I guess, popular, people started wanting to come more and more and some of them were our cooking friends. People like [Brian] Luscher and [David] Uygur and Jack Perkins and all these other guys that are just in the food space that are like, "Hey, we want to come to your restaurant but you're always freaking closed on Mondays - the only day we're off." So I was talking to Megan Dennison, the GM, and I said, "We'll let's open Monday night" and she said, "Let's do something fun, let's invite guest chefs in." So it was totally her idea.

Luscher was the first person who was like "Totally I'm in." It was funny, some of the chefs I asked were no response. Then as soon as like, Dean Fearing is on the line-up I get "Hey dude, can I have a spot?" But it's turned out to be really fun.

The fact that it's turned people who just eat pizza into people who eat beef tongue on their pizza is pretty outstanding.
Well a lot of the chefs bring their own fans and they know what they like. It's a good night. It lets the chefs play around in the oven and it lets them try popular things that they've done but in a pizza version.

Like when Dean Fearing was here he made a pizza version of his shrimp taco and his beef tenderloin taco. And then Luscher made - Luscher's was one of my favorites because he had his Barking Cats Farm jardinière on it. And then John Tesar's was really good with the crispy eggplant. He'd owned restaurants that made pizza before and he said those were some of his favorite pizzas that he'd done.

It's cool to get these chefs out of their own dining room and our people meet them. And I didn't know a lot of them personally. Dean Fearing? We didn't open until 6 and he got here at 4:30. He was in the kitchen with Matt, like doing prep work. Same thing with Tesar - he got here early. He's in there in the back with the kitchen guys breading and frying eggplant. Luscher is hanging out with everybody - we'll he's kind of a fixture around here. But it's no ego. Everybody could not have been nicer to our customers and our staff. It's really cool.

The chefs themselves seem to love it.
I was talking to Tiffany Derry - she wandered in the night Tre Wilcox was here. She said, "I didn't even know this was going on. When we were down in Houston we used to do this type of thing. The chefs used to all get together and cook and hang out and have fun together and it never seemed like they did that here in Dallas." We're going to have her in in April and we're going to have a total awesome badass from outside of Dallas to come in April. But now everybody's into it. Matt McCallister's gonna come in, David Uygur, Jon Alexis from TJ's. It's chefs and just general food people. You know, Daniel Vaughn the BBQ Snob came in and he kicked ass! That porchetta pie was one of my favorites that I've had, too, and he almost won the thing!

Why Deep Ellum?
People always vilify me for how dare I leave Preston Hollow or how dare I turn my back on the suburbs. I live in a suburb of a suburb. I live east of Allen. I have nothing against the suburbs, there's just not an economic model that can make a restaurant successful in the suburbs unless you're Stephan Pyles or Dean Fearing. If you're Jay Jerrier, no one gives a damn about you.

I would've loved to open a Neapolitan pizzeria in Allen - it would've made my life a lot easier - but when they do surveys and the residents say what we want is Cracker Barrel. I mean, that's totally cool, I love me a Cracker Barrel! But I know I can't go up there and say, "Here's Neapolitan pizza. It's one size and there's no ranch dressing."

The truck helps your reach as well.
It helps us from a business standpoint because we don't have any waste. We're not throwing out dough at the end of the week. Dough is always used. The truck is booked Monday through Thursday at public events and generally every Friday, Saturday and most Sundays at private events. We've been doing it for three years now, so the word is out.

We just ordered our second trailer and it should be here sometime in March and we're gonna run that on the Fort Worth side of things. We're getting more and more customers over there. They have different food truck regulations over there and this is more like, I call it "looking at monkeys in the zoo" the side lifts up and you can see in and we can run it more like a 24 hour-7 days a week food truck. We can park just like every other food truck which we can do down here.

And now the expansion.
We went from being a place with really stressful two to three hour waits - which everyone says is a great problem to have, and it is but sometimes people decide they can't wait. So we went from quoting two hour and three hour waits to last week, with the space open, 18 minutes. I was so happy. Because you just hate to shock people.

What's been the biggest surprise?
This is a really divisive style pizza -- some really love it and really get it and have that "holy shit" moment I had in 1995 in Naples. And some people say, "Oh, this pizza sucks. There's not enough toppings, it's too wet, it's not crispy." That's fine. I love New York pizza too. There's plenty of room for different kinds of pizza. But we've been incredibly luck. I think the biggest surprise for us has been the incredible loyalty and passion of our customers -- I mean, we have one guy who eats here, conservatively, five times a week.

Some people may think I'm a jerk. Most of the time we're joking around about everything, but I'm so appreciative of the reception we've gotten from the media, from our regular customers, from just people in general.

The Food Network. That I was totally caught off guard by. Very stressful. Awful. I don't mind talking to local people but when I think about that production and of the enormity that it is -- everything's high def with a million lights. Guy Fieri, totally cool guy and the production crew couldn't have been nicer but it's a totally tedious filming process. That Next Food Network Star -- I've said this before, but I don't know who would want to have a cooking show on TV.

Plans for the future?
It's been incredible. Who has a first year like this? The way Cane Rosso started was at Indian Princess campout at a YMCA with a bunch of dads I'm friends with through my 9-year-old. Sitting around a bonfire late at night after the kids had gone to sleep, having beer and scotch-fueled discussions back when I still had my real job. They said, "You need to stop doing that! You need to do the pizza full time! We'll get behind you! We'll put money in!" We didn't need a ton of money; it didn't cost much to get open. Now, of course, they're like, "Maaan, this is awesome."

So now as we look to-- We're putting together kind of a war chest to get a second one open in Fort Worth and a different style of pizza place that we're working on. So the whole Indian Princess tribe wants in [laughs].

For more One Year In posts published today across the Eater Universe, head over to Eater National.