This is The Gatekeepers, in which Eater roams the city meeting the fine ladies and gentlemen that stand between you and some of your favorite impossible-to-get tables. This installment: Bruce Wills of Five Sixty by Wolfgang Puck 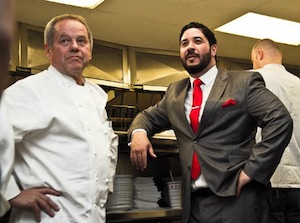 The confusion would be understandable, but don't be disappointed: an interview with Bruce Wills isn't about the latest installment in the Die Hard franchise, but it is regarding one of Dallas' most unusual and captivating restaurant settings. Wills is GM of Five Sixty by Wolfgang Puck, the high-end Asian-inspired restaurant revolving — you guessed it — 560 feet about the city streets, nestled within the apex of Dallas' crown jewel, Reunion Tower.

Puck, of course, requires no introduction. The celebrity chef has opened more than twenty restaurants around the globe, each echoing his love for luxurious, hand-crafted dishes and utilizing the eclectic flavors from his extensive international travel. Five Sixty GM Bruce Wills offered insight into Puck's empire, Reunion Tower's unique setting and the next frontier in upscale dining.

This is one of more than 20 Wolfgang Puck restaurants — aside from the unique location, is there anything you'd say that makes this space stand out as far as concept?
As far as concept, you know we have a few other Asian concepts throughout the country in different states throughout the country. The food is always aligned with what Wolfgang wants, but he tries to make it unique to the city, as well. We have an Asian concept in DC and two in Los Angeles.

There's a consistency between the dishes though. If you have a dish that you really love at Five Sixty and you happen to be traveling to DC, you'll be able to get — for example, the Hong Kong Salmon. It's a signature dish throughout the company. So, I'd say that we are very proud and very consistent. We can make our guests happy wherever they may be in their travels. Let me know you're traveling and let me set you up with a reservation in one of our other restaurants. We can absolutely prepare the dish that you love here for you there. We just want to make sure that our guests receive the same love from location to location.

I can think of few places in the city that are doing Asian fusion at the same level. Would you say Five Sixty fills a needed place in that regard?
We are definitely unique to that; I've only been in Dallas for a year in July, and that was one of the first things I researched when I decided to come here. I've been with the company for quite some time — but, I just needed to see what people are enjoying and what our immediate peers are doing. And, there's not a lot like what we do. We're very proud of what we do. It's not very frequent that we get a guest who is disappointed. The flavors are some of the best that I've ever had.

A lot of people say, you know, how does a guy from Austria make Japanese food and Chinese food. It's not typical, but Wolf is very versed in many culinary styles, and his travels throughout the world have allowed him, in my opinion, to really touch on any cuisine that is out there — especially, the ones that he enjoys personally. He doesn't stray too far from tradition, but he does do things his very own way that not too many people can duplicate.

Five Sixty boasts one of the most unique settings in Dallas. Does the circular floorplan present any unique challenges?
You know, believe it or not, I'd say the challenge is more for the guests. Because they are there only one night. When it comes to us we have sections and you really don't have to leave your section. So there's little room for confusion. There are obviously certain aspects of the space that are stationary — the front door, the elevators, the kitchen — so you always know where those are going to be located. Guests get up from time to time to go to the restroom or to check a score on one of the TVs and when they turn around, their table is gone and they need direction or assistance. You'll see guests doing laps around the restaurant, trying to find the exit. A common question is: How do I get out of here? As an employee, you know to look for that blank "I'm lost" stare and quickly grab those people and assist them to wherever they need to go.

Well, then are there ever any challenges when hiring staff? Since the restaurant is rotating, I imagine some people are just not cut out for it on a daily basis?
On the contrary, I think that is actually an enticement when it comes to hiring staff; it's just a really cool place. It is an unusual but great setting, being 560 feet in the air in a revolving building surrounded by nothing but glass. I think it's intriguing to most to work in that environment and setting. I don't think it affects them one way or another.

For guests, it can be a little confusing: where am I at, where did I just leave from, where are the restrooms? And, directing guests can be a little confusing all the way up the line to the managers. But, the intriguing part is that it's totally different than any building most of us have ever worked in, so I think it is something that the staff is ... I think they may be the envy of some of their peers. You know, come and see my place. I think they're proud of it and excited to tell people about it.

Almost every restaurant is focusing on cocktails right now, particularly the pre-prohibition classics. I can attest from experience that they are spectacular at Five Sixty. What would you say causes them to stand out among the trend?
I have to attribute all of that to our executive chef, Lee Hefter [who is over the whole company]. He's a genius when it comes to cuisine, but also has a great love for spirits and beverages. He's put his hand in producing a new program. He travels quite often — we have restaurants in Singapore and London, for example — and when he travels he visits a lot of places and sees the love and the care going into things all over the world. His passion and his palate are some of the best I've ever seen.

But, like with cuisine, it all comes down to a good recipe and you can't stray from that. When a recipe is put together with particular flavors to make a good cocktail what it should be, you have to stay true to that. There's no "a pinch of this a pinch of that." It has to be measured and the ingredients have to be the best. The spirits we put into our cocktails are some of the best you'll find in any bar and the ingredients that we make on our own — the syrups and fresh-squeezed juices — they are an exact science. It's something he's studied and asked us to study, and he's given us great recipes that make them perfect.

What's your favorite dish?
I love the Lacquered Duckling. It's just the way it's prepared. The outside is crispy and when you bite into it, it has a nice texture. Underneath that, it's just moist. The meat on the breast is just delicious. The sauce change from time to time — sometimes it's a port wine sauce, sometimes it's a huckleberry compote, something like that — you can easily pair a great bottle of wine with it. But, just the flavor — it's very rich, very sweet, a little bit of everything that is pleasing to most people. It is by far my favorite.
And, others agree. If I have twenty to sell tonight, if I have fifty to sell tonight, all are going to sell. It's something that I consistently have to take off the menu at a certain point of the night because people just buy it up.

Anything new we can anticipate?
Well, as you mentioned, the cocktails — because it's our latest and newest and (currently) greatest program — they're definitely a hot topic with me and everyone else in the restaurant. We've introduced twelve new cocktails to our list and have had nothing but success with them. The program's going so well and being received so well that we're going to see Chef Lee this week in Las Vegas, and he's going to introduce another five of his special secrets for me to bring back to Dallas. I haven't even seen them yet — he's very protective of them — and he'll put them in my hand when I'm in Vegas, and when I return we're going to work on them, get those perfected and add to the list in the coming weeks. Wolfgang Puck has always produced great food, but we're producing great cocktails as well now, and it's something I'm really excited about.