Share All sharing options for: Ocean Prime's Walter Hatcher on Being a 'Yes' Man and 'Keeping Up' With Kim

This is The Gatekeepers, in which Eater roams the city meeting the fine ladies and gentlemen that stand between you and some of your favorite impossible-to-get tables. This installment: Walter Hatcher of Ocean Prime 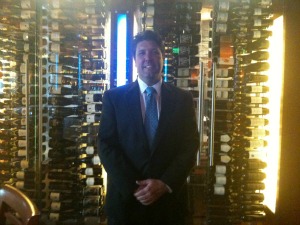 Ocean Prime wants to be your everything. The "Modern American Supper Club" is looking for long-term relationships and extensive courtships from happy hour clear through to a digestif on the airy patio. A dazzling, but reserved, space with wood grain and plush leather, Ocean Prime is modern, yet refined, a comfortable atmosphere with live music, but quiet enough for an intimate conversation. Balancing beef and fresh seafood, with options like the oft-raved crab-crusted talapia and bone-in filet, Ocean Prime defies conventional steakhouse standards for an eclectic, upscale combination.

General Manager, Walter Hatcher, tells us why the consummate "surf and turf" experience hits all the right notes in inland Dallas, and how his staff "kept up" with the Kardashians during a recent visit that could have gotten all-too "real."

We understand that the restaurant was featured in a recent episode of Khloe and Lamar; what was that about?
It was a weekday and a night that Kim came into town. She likes coming here – apparently she'd come in frequently when she was dating one of the Dallas Cowboys – and that's where she wanted to dine. We opened up a private dining room because they wanted to be able to film from two different angles. It was nice. They got to eat right inside, but you got to see the outside dining room, and people got to see them. It really wasn't a busy night, though, but I think people were interested, for sure. What was really interesting was that who Kim used to date was actually in our other dining room at the time. She poked her head and in and said 'hello,' and that was about that.

What are some ways that the "Modern American Supper Club" concept sets Ocean Prime apart from some of the other restaurants here in Uptown?
We'd like it to be a place where someone can spend an evening, not just sit down to dinner, but perhaps also enjoy the live entertainment, or enjoy our patio outside, with cocktails and desserts after dining in our main dining room. We want to really show people a great time, not just for dining experiences, but for every aspect.

We're nearby to some of the city's very best hotels – the Ritz Carlton right across the street; the Rosewood, a classic hotel. It's a wonderful way to see Dallas – Uptown being so new, so clean, so beautiful, it just represents Dallas in a wonderful way. You're so close to so much, it's centralized so, for example, even though the stadium is a little ways away, it takes you no time to reach 75, the Tollway, those streets that branch out. The AAC is right down the street. Come here before the game – happy hour, a couple of cocktails, appetizers before you walk down to watch the Mavs win. It's a perfect storm, so to speak.

Dallas isn't known as a real seafood city; what are some ways the restaurant has approached that?
I think it's just a matter of building the trust that hey, you can get great seafood in Dallas. So often you'll hear about people flying in fresh seafood daily, and our chefs do select the seafood daily for its freshness, for its quality, and that's what we've done. Our executive chef, Sonny Pache, has done a phenomenal job building relationships with various mongers. Certain times per year we'll get this Hawaiian snapper and it's the cream de la crop of fish that, when you're in Hawaii, you definitely want to try. We have a feature program that features phenomenal fish like that.

Recently, we changed the menu over to reflect summertime. Seasonal items like halibut are on the menu now and they're fantastic. We've never tried to mask any of the flavors of our food with sauces or too much seasoning; we've tried to just showcase great quality fish, simply great food, and just accompany that with nice, subtle flavors.

Do you have a favorite dish?
It's the halibut. It has to be because it's seasonal. If I had to choose something that was on our menu in the past, it was probably the truffled sea bass. That's probably the most popular. But, halibut ? when it's in prime season, it's tough to beat.

The Ocean Prime website states that "For us, the answer is yes. What is the question?" What are some of the more challenging questions you've had?
Challenging? Truly, it's not difficult to say yes and to do. We're fortunate because most everything is prepared to order, as ordered. So it's easy when it comes to food requests, whether it's an allergy, whether it's a preference. It's really not that difficult to accommodate.
I think people aren't used to being told yes, and so they can be resistant to even ask. But, when you make it a habit, it's more natural to say yes than it is to disappoint a guest. Hospitality is simple: all we want is for our guests to come through the front door and have a great time.

Say it's 7:30 on a Saturday night. Is it possible to walk in?
Of course. Typically, we can find a seat for someone immediately. We're very fortunate – we have a giant restaurant. With that being said, if they want a booth, we might have to make them comfortable while they wait because there are limited booths – there are seven, and they are very popular. However, having four private dining rooms, having a large patio, typically we can make things happen very quickly.

Do you have regulars?
Yes, we like to call them Frequent Diners. Several. We've been around [in Dallas] for about two and a half years – it takes a while for people to start to trust who you are. We are privately owned but we do have multiple units [around the country] and in each location people begin to realize that we're not just a restaurant trying to take their money, but we're part of a community and want to become a part of a community. Here, guests are learning to trust and know we'll take care of them every single time. The people of Dallas are wonderful.