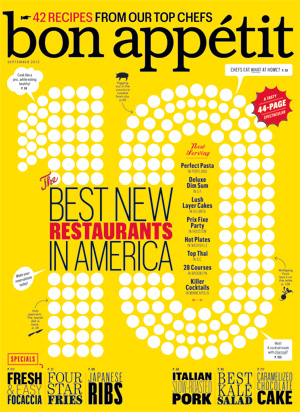 In Bon Appetit's upcoming September issue, longtime restaurant editor Andrew Knowlton lists his choices for the 10 best new restaurants of 2012, including Oxheart in Houston and The Catbird Seat in Nashville. No Dallas restaurants made the cut, and in a live chat, he explains that he likes the food here okay...just not as much as in Austin and Houston:

I went to Dallas, Fort Worth and I've had some good meals there in the past few years. I liked Smoke and Bolsa, I also liked Tei-an. But I gotta say that I think for whatever reason Dallas isn't up to Austin and Houston when it comes to independent, non-corporate restaurants.

If it's any consolation Oak in Dallas and Woodshed Smokehouse in Fort Worth made the list of 50 nominees.
· Missed the Live Facebook Chat with The Foodist? Here's What Went Down [BonApp]
· The Hot 10 2012: America's Best New Restaurants [BonApp]