Finding Solace (and Good Beer) Thanks to a Trio of Bartenders

Share All sharing options for: Finding Solace (and Good Beer) Thanks to a Trio of Bartenders

This week we're spotlighting some of the best front of house professionals around town. Read on to hear how Taco Trail blogger José Ralat-Maldonado was saved from the sometimes lonesome fate of a freelance writer by a few friendly bartenders at Whole Foods: 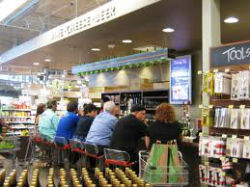 A work-from-home freelance writer in a new city is a solitary creature. And here I was, one such person, new to Dallas without a soul to shoot the bull other than my blind 12-year-old Bichon Frise. Then, I stumbled upon the bar in the Whole Foods Park Lane, across from my house.

Hallelujah. I could take care of my grocery shopping, slake my thirst for the citrusy punch of West Coast IPAs and stave off the tic-inducing loneliness of writing—in one place—thanks to bartenders Mitch Billingsly, Alex Blue and Warren Christie.

Mitch was the caustic enabler—I drank more than I should when he was pouring—Warren the buddy type who kept a stash for loyal customers and Alex the cynical beer snob to whom you had to prove your hops smarts. The trio was supported by a cast of regulars, among them a globetrotting financial consultant, a surly ad man and Warren's grizzled father, men who I now count as friends. I was in heaven, a neighborhood watering hole hidden in plain sight. The fact that people were aware of this gem was fine by us.

The bartenders have since left Whole Foods and with them the regulars, including me. But the lot of them gave me the social interaction required to retain my sanity, not to mention help ease me into life in Dallas.

STK Opens First Texas Restaurant in Dallas and Yes, Steak Is the Menu