Tiffany Derry Leaves Private Social to Do Her Own Thang

Share All sharing options for: Tiffany Derry Leaves Private Social to Do Her Own Thang 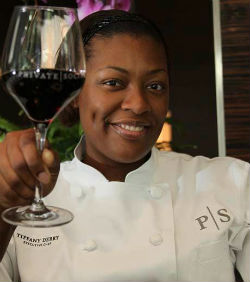 In a somewhat surprise move, Top Chef alum and Dallas darling Tiffany Derry announced yesterday that she's resigned from her post as executive chef at Uptown hotspot Private Social to pursue other projects (including a "national scale TV thing"). Her last day at Private Social will be January 28. Derry has led the kitchen at PS since it opened back in fall of 2011.

Eater asked Private Social owner Patrick Halbert how he felt about Derry's departure; he said he was not surprised by the move, noting that "She has remained determined to focus on her career with Tiffany Derry Company, and I have supported her since day one." Halbert says he's "very excited about the surprises [he has] planned for Dallas", and in regards to Derry's replacement, he's currently undertaking the interview process and has "a few great chefs in mind".