Editor markup for Clay Pigeon. This is only visible in the story editor.

Chef Marcus Paslay may have picked the baddest of the bad luck days to open Clay Pigeon Food & Drink, but for the sake of optimism, let's think of another adage: the ol' third time's the charm.

The Arlington native's first restaurant opened on Friday the 13th last week in the space once occupied by two other restaurants: Chef Lou Lambert's self-titled steakhouse Lambert's Steak, Seafood & Whiskey, and, before that, Pedro's Trailer Park, an early venture by Paul Willis, the founder of Fuzzy's Tacos who recently passed away.

Followers of Lambert's will feel at home with the both the menu and decor. The tiny, seasonal menu takes a straightforward approach: Small plates include braised veal cheeks with parsnips, chicken liver pate and roasted bone marrow. Large plates consist of pork shank, housemade pastas and an assortment of steaks, all wood-grilled over oak and mesquite; there's also a couple flatbreads including one with pancetta, onion jam, roasted pears and blue cheese.

"Mostly everything will be made from scratch," Paslay says. "Down to ice cream and bread."

Many of the Lambert's fixtures remain, including the gorgeous, hand-cut cedar tables, rustic branding irons and the copper-top bar upon which a brass beer tap rests.

Paslay did make a few changes to the interior. He sprinkled in some family heirloom antiques and exposed the building's original brick to give the room a warm glow, and converted an area once used for a stage to a climate-controlled wine room. Punctuated by local and regional bottles, the wine list is close to 100 labels long; there's also a full bar.

A graduate of the hallowed Culinary Institute of America (CIA), Paslay worked in kitchens in Alaska, Napa Valley and Vail, returning home to North Texas and cooking at Nick Badovinus' beloved Neighborhood Services until going solo to open Clay Pigeon.

"That was always my plan — to travel, to work in kitchens across the country, to learn everything that I could, then come home and open my own place," he says. "Working in different kitchens with different types of food, I think that makes you a better chef."

Right now, Clay Pigeon is open evenings only Tuesday-Saturday. Stay tuned after the New Year, when hours may expand to lunch and brunch. Scope out the Pigeon's winter menu below: 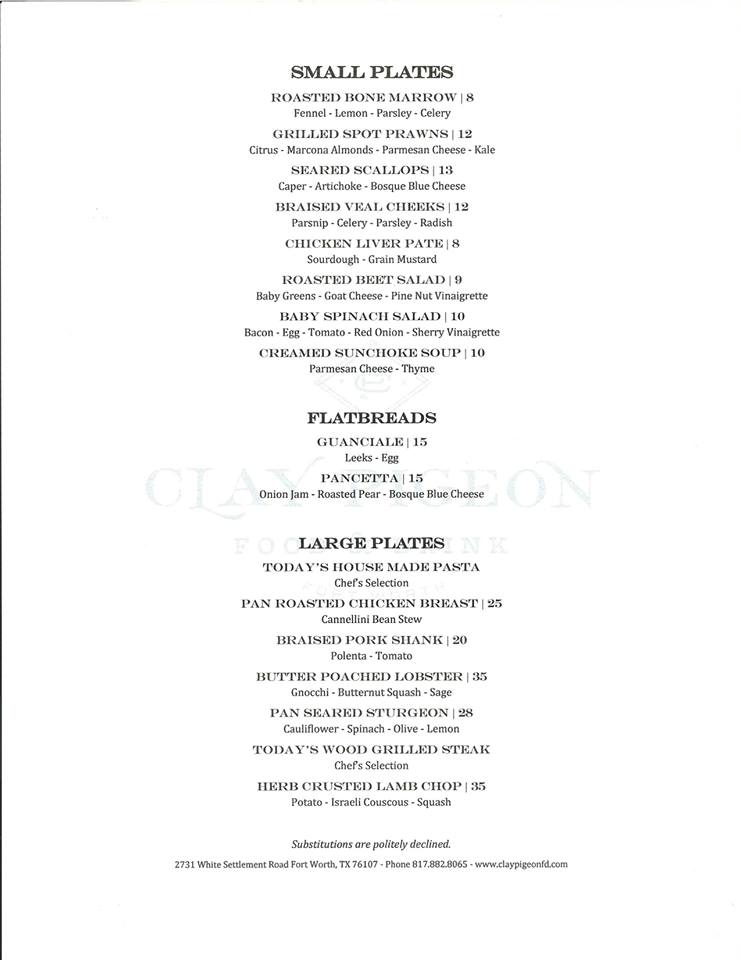