Share All sharing options for: A Chat With Ascension Coffee's Mike Mettendorf

Ascension Coffee's Mike Mettendorf brings a masculine energy and scientific nuance to the art of brewing the perfect cup of coffee. But don't be intimidated by his burly exterior and impressive arsenal of coffee chemistry knowledge — he might be the friendliest coffee nerd this city has ever seen.

A transplant from the East Coast, he brought his years of experience both in brewing and business to Dallas, both working behind the bar slinging lattes and behind the scenes as a consultant for The Pearl Cup as it prepares to open its second location in Richardson. Most notably, however, he's helped Ascension make its mark as one of the premiere spots for handcrafted caffeine, in a city that's way overdue in bucking the franchises and enjoying a serious coffee boom. Eater sat down with Mike to pick his brain about local coffee culture, brewing methods, and to find out how many cups of coffee a day a barista actually drinks. 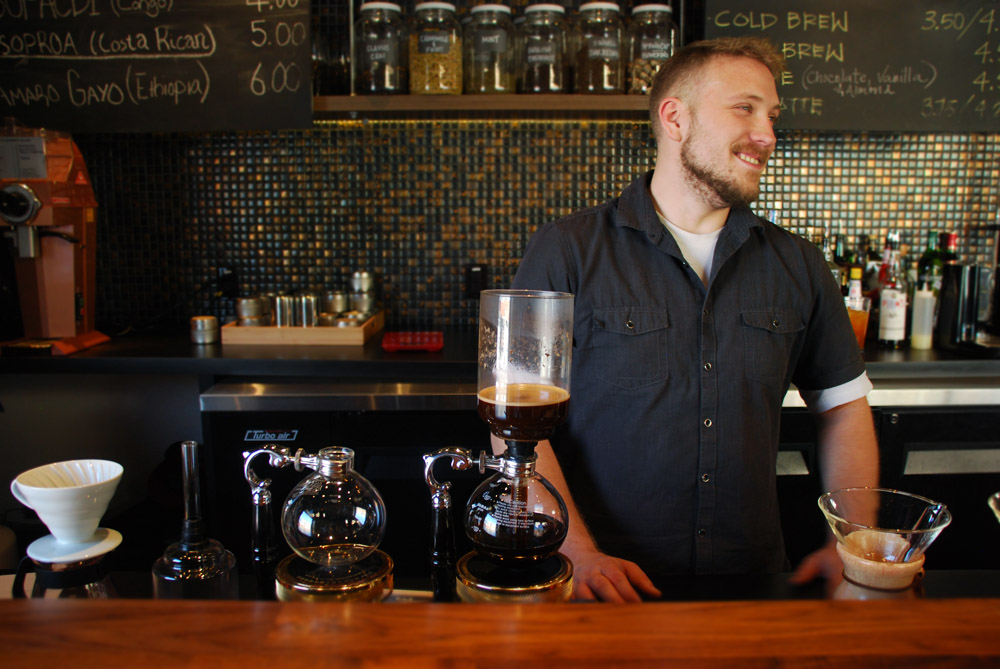 When did your love affair with coffee begin?

I first started drinking coffee when I was 15. I would have a friend pick me up to drive me to high school and we would stop at the gas station and use the cappuccino machine there, which is the one where you push a button and it squirts a bunch of hot, frothy milk into a cup and then we'd drop in about 7 or 8 French Vanilla crème packets [laughs]. So, we did that for a while. And, like a lot of people, that's what we thought coffee was. You know, it's this sweet, tasty drink that gives you energy. So then, a few years later, I got the first job I ever had working for Caribou Coffee, which was Starbucks' biggest competitor on the convenience end of coffee. I opened a few stores for them when I was really young.

Why do you think the coffee boom is hitting Dallas right now in such a big way? Was it just a matter of time?

Dallas is a really big, transient city. A lot of people here didn't grow up here, and a lot of them come from Houston, Austin, or people like me who are from DC and New York. I moved here 2 ½ years ago, and a lot of this is imported coffee culture. But the other half of that is the coffee community that was already here. So, it's the few shops that were here 2 years ago that formed such a tight-knit community, they all knew each other really well, and that helps force growth because everyone's very supportive of each other. That, and you're starting to see restaurateurs and business owners who have a big portfolio of other businesses who see the success of places that created a foothold in the area, like The Pearl Cup, and they say, 'hey, we can do that too, we can open Mudsmith or Ascension.'

Can you talk about the complexity of coffee and what makes a great cup of coffee so good?

At the end of the day, the most important thing is drinking what you like to drink. There aren't necessarily right and wrong ways to make coffee, but there are definitely good and bad ways to make coffee. There's a lot of science behind it, and it takes a lot of time to learn that and take it to heart so it's something you can just do and apply. There are hundreds of objective variables to each independent brewed cup of coffee. Every time, it's going to be a little bit different, and we do a lot to account for that so we can be consistent and brew you the same cup of coffee every day.

So specifically for Ascension, a lot of our training focuses on the objective aspects of coffee. Rather than talking about coffee, saying it's got peach notes, and notes of stone fruit or blueberry, which some really do and it's very apparent, we spend more time focusing on objective extraction. That means that we're focused on making sure our coffee has a proper concentration of water, we've extracted the right amount off of our beans, we've got the correct yield and temperature, and we're adjusting for things like humidity and the age of the beans that we're using. While two weeks seems pretty young, the difference from beans the day off of roast and two weeks off of roast is huge, it's massive. There really is a giant different difference in terms of taste. 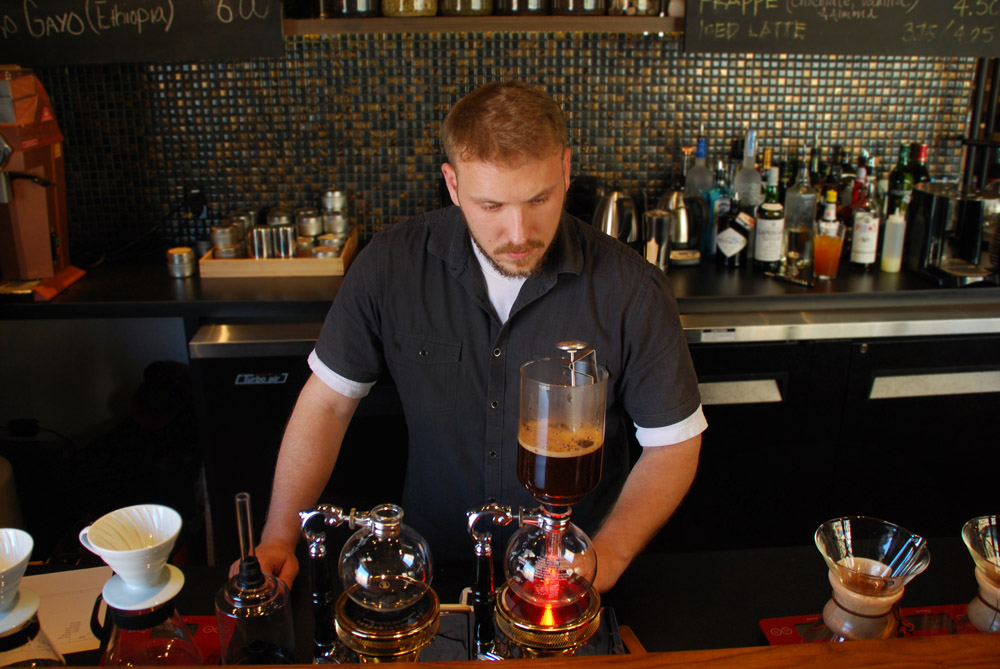 At first I was getting the impression that brewing coffee was an art, but now I see it's also a science.

And that's something that I've discussed with a lot of people over the years. It absolutely takes, again, passion and romance to brew a cup of coffee and you have to have that to have the want to learn more about it, to know what you're doing. But, at the end of the day, to be the best at it, you need to focus on the science behind it.

What about all the different brewing methods? How do they bring out different elements in coffee?

There are three major types of brews. You have emulsion, percolation, and decoction. Decoction is something we won't use here. It's like Turkish coffee, which is boiling coffee in water. It's guaranteed over-extraction. It's what cowboy coffee is – they would boil down a bunch of coffee and pretty much make a coffee extract, or reduction, put that in a flask and go on a cattle drive so they could mix it with hot water and have their cup of coffee that'll last them a whole month.

Then, you've got percolation. Percolation is passing water through coffee grounds, so that's a Chemex or V60. And the difference between those two brewing methods is the density in their filters. So with the latter you'll get a more robust, rich body, and with the former you'll get a clarity and crispness out of your coffee, you'll get to know it a little bit better. Basically you have more access to the secondary and tertiary flavors with the Chemex versus the V60, which is a little richer and heavier. Now, with percolation, you're passing water over coffee grounds, so you're pulling off some of the softer solubles that have a lower solubility point because you're spending less time in contact with water per particulate. So you get a little bit more of a nuanced cup out of pour-overs.

And then you have emulsion, which is like a French press or a siphon pot, where you've completely emulsified your coffee grounds in water, and they spend more time in contact with the water. Typically there's a little bit more agitation as well. So those coffees tend to pull off a higher concentration of heavier compounds, and you'll get a richer, more robust cup of coffee out of them.

What is it about coffee that inspires the passion you've described?

For me, the start was the community. It was the people behind it. It's a lot like being a bartender, but it's more in-depth and more involved. Coffee shops are community anchors – it's where your neighborhood comes to hang out and spend time and get their coffee, so you get to be an important part of their community. And it's not just the coffee community but it's the community of wherever you're located. So that's the most rewarding thing, and it makes it the most valuable to me. 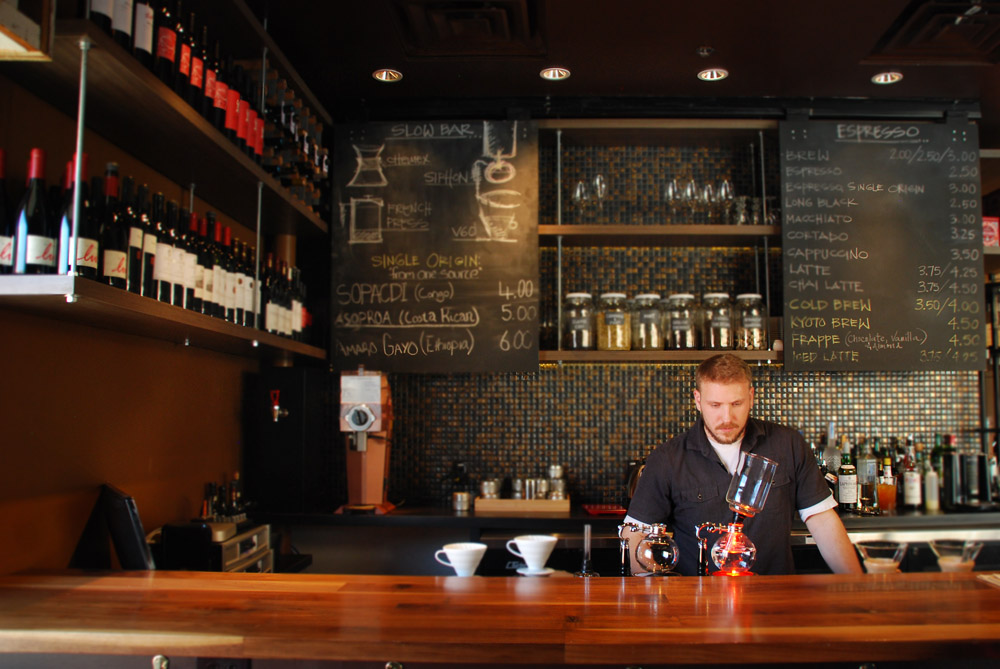 How many cups of coffee do you consume on average per day?

Yeah! That's one of the biggest misconceptions out there, that we're all coffeeholics. And, for sure, I love coffee. It's absolutely the number one passion of mine. But, I probably have one cup of coffee in the morning, whether it's a mixed drink like this [cappuccino] or a cup of coffee that I brew. Throughout the day if I'm working, I taste hundreds of cups of coffee. Every cup we brew we taste to make sure it's correct. So there's never a lack of caffeine, that's for sure.

What are some simple steps that people at home can take to make better coffee?

The number one thing is fresh coffee. However you brew it, whatever method you prefer, it's got to be fresh. Fresh coffee is ideally, at least from a specialty coffee shop's point of view, is less than two weeks from its roast date. And coffee, ideally, is roasted within a year of being harvested, if not much sooner. So that's the biggest first step. Next to that, a great cup of coffee takes some passion and romance to make, so it's never as easy as some kind of set it and forget it method, whether you're French pressing or using Chemex or even a Mr. Coffee. They all take effort. And we realize that not everyone wants to put that effort in there, not everyone has months and months to learn the details and the science behind how to brew their coffee well, so that's why we're here.