Where John Tesar Eats When He's Not at Spoon

Share All sharing options for: Where John Tesar Eats When He's Not at Spoon

Welcome to Where Chefs Eat, a new Eater feature in which we grill local chefs to figure out where they dine when they're off the clock. First up: Spoon's John Tesar 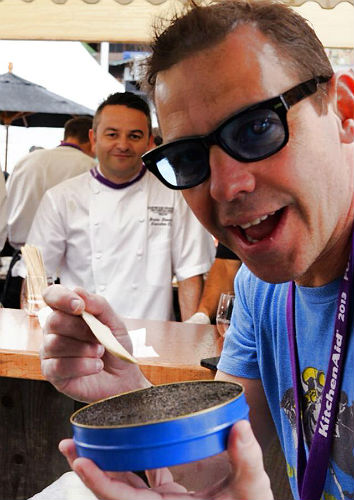 One could argue that since the opening of Spoon Bar & Kitchen late last year, John Tesar has gone from "The Most Hated Chef in Dallas" to one of the city's most acclaimed and perhaps even adored.

While the seafood-centric menu at Spoon tends toward the experimental and the extravagant, man cannot survive on foie gras and caviar alone; Eater recently got the lowdown on where John Tesar likes to dine when he's not in the kitchen at Spoon.

Do you have a favorite breakfast spot?
Believe it or not I'll go to breakfast at Denny's, if I do go to breakfast. I like it. I like the Moons Over My Hammy breakfast actually. I very seldom eat breakfast, although I love eating great hotel breakfasts when I'm on the road. Those breakfasts where they charge you thirty bucks for a pot of coffee. [laughs] Eating breakfast in my hotel room is really nice. You feel rich for the moment.

Go-to late night spot?
Cedars Social is my hangout. I just feel comfortable there because of my associations, but I also really think it's one of the coolest places that's ever been done in Dallas. There's always a lot of energy there late at night, and interesting people; it's a gathering place. You can get really good food and they take great care of you. It's like a home away from home.

Date night destination?
For date night I love Nick & Sam's. Its just the whole theatre of it. I'm not commenting on steakhouses or quality or competitiveness; I just like Samir [Dhurandhar, executive chef], I love the whole dark kind of old-school feel, and the theatre of it... We went for our anniversary the other night and they sent out a bottle of Dom Perignon, and they roll it out on a champagne cart with dry ice. I mean, who the fuck does that in this day and age? It's cheesy to the point where it's charming, you know what I mean?

Favorite ethnic food spots?
I love Royal Szechuan in Richardson by the Supermarket 88 there. I think it's some of the best Chinese food in Texas. And Royal Thai off Lovers. Jay [Potchana, owner] does just really good straight up Thai food. It's in like a shopping mall but it's always packed, you can hardly get in the door at 6:00 on a Friday night. I'm interested to try all the new places too, like Mot Hai Ba and Pakpao Thai. It's exciting for me that Dallas is finally getting not only into chef-driven stuff but also more ethnic flavors. It's just going to broaden everybody's palate.

Do you ever (gasp) eat fast food?
If I do it's only out of desperation and it'll be Sonic because I just think that whole drive in thing from Happy Days... it's just convenient. I'll get a hot dog and take everything off of it and just eat the hot dog. But that's like, if there's nothing else to eat and it's 1 a.m. and I'm driving to Houston or something. Also my wife sometimes sends me out at 11:00 at night to get a chocolate shake, they're half price after 9:00!

What about when you're traveling in other cities?
Manhattan, I have to go to Le Bernardin or Marea, like I cannot avoid them. I also love Blue Ribbon on 58th, Blue Ribbon on Sullivan Street, Blue Ribbon Sushi. It's like going home. There are some days... I went to dinner at Daniel [in Manhattan] and had a nine-course tasting menu with a friend, and right after I went to Blue Ribbon with [local blogger] Brad Murano and had 2 dozen oysters, fried chicken, and the bone marrow and oxtail ragout which is the most decadent crazy late-night food you could ever eat in your entire life.

I was just in Chicago and I love Blackbird, the chef there just won a James Beard award. It's probably one of the most innovative, progressive restaurants I've eaten at in America. I also love Girl and the Goat; forget Top Chef, Stephanie [Izard] is just a really good cook and a good business person. There's a cute little place there called Gather, the chef used to be Charlie Trotter's chef de cuisine in Vegas, it's just the cutest little restaurant and the food is very, very good. Creative and affordable too.

My buddy Matt Accarrino is the chef at SPQR in San Francisco, and I think he's a mad genius that people are really going to come to embrace and he's going to be a huge chef in this country because he's really talented.

In Vegas, I have to go to L'Atelier de Joël Robuchon at the MGM Grand, I love the whole counter setup and the execution of the food. I also love Blue Ribbon at the Cosmopolitan there.

Tesar about to chow down on some caviar as Mansion chef Bruno Davaillion looks on. [Photo credit: John Tesar/Facebook]

Are the Folks Behind ‘Yellowstone’ Investing in Fort Worth’s Cattlemen’s Steak House?