Share All sharing options for: Where Tim Byres Eats When He's Not Manning the Stove (or the Barbacoa Pit)

Welcome to Where Chefs Eat, a semi-regular Eater feature in which we grill local chefs to figure out where they dine when they're off the clock. 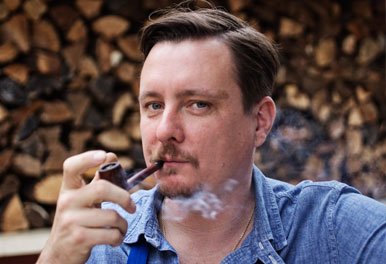 The name Tim Byres has practically become synonymous with Texas cuisine over the past several years. His groundbreaking restaurant Smoke at the Belmont Hotel has received plenty of accolades both locally and nationally for its unique take on barbecue and obsessive commitment to making everything from scratch, while newer addition Chicken Scratch quickly wormed its way into the hearts of many Dallas diners as a family-friendly destination for finger-lickin' good food.

On top of all that, he recently released a cookbook called Smoke: New Firewood Cooking to share his perspective on authentic American food and to show folks at home how to do everything from pickle okra to dig an outdoor pit for barbacoa. But certainly he isn't slow-cooking all of his meals over an open flame; here's where Tim Byres eats when he's not manning the kitchen (or the pit).

Favorite breakfast or brunch place?
Deli News in North Dallas is a NYC-style Jewish deli with crazy-big breakfast plates. The corned beef hash rocks with a side of spicy mustard, half-sour pickles and rye toast.

Where do you go for a quick lunch?
My place, it can't be any quicker than that. It seems funny but it's either at SMOKE, Chicken Scratch or at home. My days are pretty on-the-go and focused inside of my little bubble.

Date night destination?
Tei-An, or "Teich's House" is a gem of a place. The chef Teich[ii Sakurai], his wife and family of service staff offer traditional handmade soba paired with his own flare of not-so-traditional touches. Sunday night, it's the best place for any chef or foodie to go and really enjoy a very adult, peaceful and meaningful meal of whatever the kitchen is cooking.

Favorite pizza place?
Coal Vines is a pizza place and kind of polished bar in Uptown. Pies are great and it's right in the middle of all the glitzy flash of Big D.

Favorite ethnic food spots?
Kalachandji's is off the grid but hands down the best place for the real-deal balance of mind, body and soul. It's a daily changing vegetarian buffet in a courtyard patio inside the Hare Krishna Temple in East Dallas. The tamarind iced tea is perfect. They serve gluten-free, meat-free, raw and cooked Indian specialities. Try any of the daily halvah confections for dessert, blueberry has been a standout.

The Grape is a long-time local standout for great food. Chef/owner Brian Luscher and his crew are so welcoming, every time you come back it's like coming home.

The Mansion on Turtle Creek is where I last wore my tuxedo... I met my wife while we were both working there, and we later married in the President Franklin Delanor Roosevelt Room with dinner in the cellar. The Mansion Bar is my first choice for a grown-up cocktail and tie situation or a Mad Men-style lunch.

Stephan Pyles is one of my closest friends and a legend in Texas foods. Anywhere he is cooking is always a pleasure.

Any favorite destination restaurants to hit when you're traveling in other cities?
Poole's in Raleigh, North Carolina — [chef] Ashley Christensen is in it for all the right reasons.

Stella's Kentucky Deli in Lexington, Kentucky is an old house turned into a granola & oats spot served by twenty-something local hippie kids. You walk in the house and sit at the diner counter in the living room or on the wraparound porch. Got to get the soup of the day and for sure the Hot Brown sandwich with gravy and sprouts.

The Spotted Pig in NYC is either the last or first place I go anytime I'm in New York. I just love the no-nonsense, 'how about a pint of beer?' kind of vibe.