What You'll Be Eating at This Year's State Fair of Texas

Share All sharing options for: What You'll Be Eating at This Year's State Fair of Texas 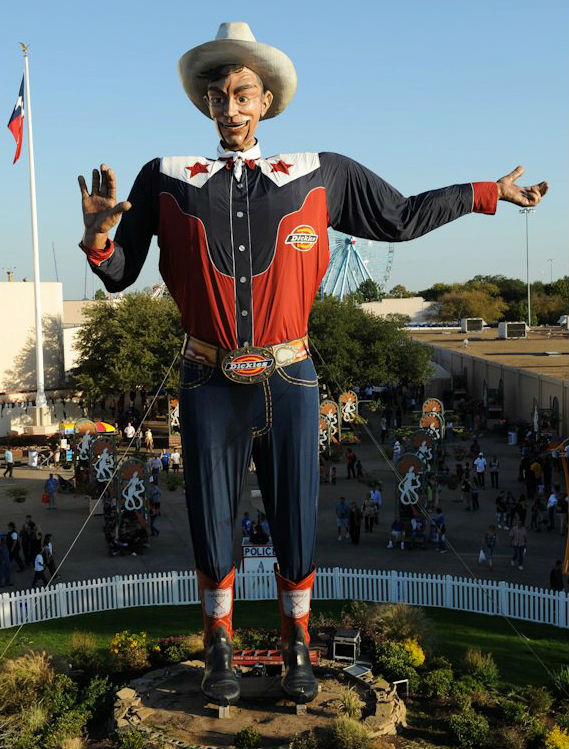 The 2013 State Fair of Texas (and the debut of the brand new, risen-from-the-ashes-like-a-giant-Dickies-wearing-phoenix Big Tex) is just 31 days away, and that means it's time to start plotting your annual deep-fried food binge (and possibly stocking up on Lipitor?).

This morning brought the announcement of this year's Big Tex Choice Awards nominees, proffering names and descriptions of what are bound to be this year's hottest fair foods, and this year's creations look especially? hearty. How will they compare to previous year's winners like Fried Beer, Deep Fried Bubblegum, and the perennial favorite Deep Fried Butter?

The actual awards will take place on Labor Day, with judges choosing winners in the categories of "Best Taste" and "Most Creative." Below, the descriptions as posted this morning by Teresa Gubbins at CultureMap (and our preliminary judgments):

· Awesome Deep Fried Nutella. "Cream cheese and Nutella are whipped and spread over flaky Phyllo dough sheets, rolled up and deep fried. Served with a drizzle of honey and shaved almonds." Sounds like putting "Awesome" in the name is a little redundant, because anything with Nutella is clearly a winner. Best Taste potential, perhaps?

· Deep Fried Cuban Roll. "A filling of slow cooked pork shoulder, chopped ham, Swiss cheese, pickles and secret sauce is spread onto a slice of Swiss cheese, rolled up in pastry dough and deep fried. Roll is served with a side of majo sauce for dipping." Sounds like annual Cuban sandwich hawkers Taste of Cuba will be getting a run for its money this year. (Also, does 'majo sauce' = mayo + mojo? Hmm.)

· Fernie's Deep Fried King Ranch Casserole. "This stick-to-your-ribs TEXAS SHAPED creation is melted cheese, salty, spicy, goodness that is dipped in a zesty southwestern egg wash and coated in panko bread crumbs. Deep fried golden brown and crunchy on the outside; steamy and creamy on the inside! Served with a side of red, white and blue tortilla chips and your choice of our homemade "salsafied" sour cream or cheesy queso." While in general we're vehemently opposed to anything with the word 'casserole' in it, a side of queso covers a multitude of sins. Also, it's TEXAS SHAPED.

· Fried Thanksgiving Dinner. "Mama's homemade stuffing and diced roasted turkey are rolled in a ball. Next it's dipped in southern cream corn and rolled in seasoned corn meal — all fried to a crispy golden brown. Served with old fashion giblet brown gravy. The zesty orange cranberry sauce fills your dipping needs and results in a complete Thanksgiving dinner, FRIED!" The idea of Thanksgiving dinner somehow just doesn't appeal as much when it's 105 degrees outside and you've just ridden the Tilt-A-Whirl; nonetheless, this sounds like a strong contender for Most Creative.

· Golden Fried Millionaire Pie. "Sweetened, fluffy cream cheese filling is loaded with golden pineapple and Texas pecans then wrapped in a flaky pie crust and fried to a golden brown. Topped with whipped cream, toasted coconut and candied pecans." This tooth-achingly sweet sounding concoction does not actually seem like something a millionaire would eat. Where the caviar at?

· Spinach Dip Bites. "Creamy and delicious spinach artichoke dip bites are coated with crispy tortilla chips and flash-fried until golden brown. Bites are served with salsa for an additional kick." Thank goodness the State Fair is simplifying that whole pesky chips-and-dip situation by rolling the dip in the chips and deep-frying the shit out of it.

· Southern Style Chicken-Fried Meatloaf. "Homemade meatloaf slices are coated in an authentic Texas chicken-fried breading and deep fried golden brown. Served with garlic mashed potatoes, Texas cream gravy and a ketchup/brown sugar glaze for dipping." This one sounds mighty hearty; perhaps best to sample this on the way out so as to avoid puking off the side of the Texas Star.

· Texas Fried Fireball. "Pimento cheese, pickles, cayenne pepper and bacon are rolled into a ball, dipped in buttermilk, covered with a jalapeno-infused batter and deep fried. Served with chipotle ranch for dipping." Now this is what State Fair food dreams are made of. Anything that contains the words "served with chipotle ranch" in the description is basically guaranteed to be a top seller.

STK Opens First Texas Restaurant in Dallas and Yes, Steak Is the Menu