Share All sharing options for: Malai Kitchen's Braden Wages on Lessons From Vietnam

When you own a progressive Thai-Vietnamese restaurant, traversing Southeast Asia is simply part of the job description. Here now, Malai Kitchen chef/owner Braden Wages recounts the tale of his last trip abroad (along with wife and partner Yasmin) and how he plans to put his newfound knowledge into action on his West Village restaurant's menu.

Typically when we visit a foreign country, it's to eat and experience as much food as possible. But just a few weeks ago during our latest visit to Vietnam, we got the chance to learn as much about the people as the food. The Vietnamese realize that as a developing nation, the more they share, the more people will understand and appreciate their culture. Our travel mission is just that: we want to experience their culture so we can share it with others through our food.

This time around, we ate and drank our way through Singapore, Danang, Hue, Hoi An, the Mekong Delta, and Ho Chi Minh City. Below are some of the stories behind new dishes you'll see popping up on the menu as a result of our trip. 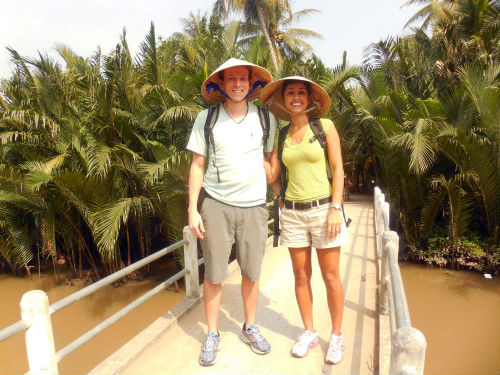 Braden and Yasmin Wages on the Mekong Delta.

On the way back to our hotel after a long day of eating around Ho Chi Minh City, we noticed a small restaurant packed with people dining on what looked like breakfast potatoes with eggs. Curious, we fought our oncoming food comas and joined the throng. We bellied up to a heavy-looking dish served with a side of shredded green mango and a vinegary soy sauce called Hoi An Hash. With the first bite, we immediately knew they were not potatoes. Turns out, the mystery chunks were crispy rice noodle pockets cut into cubes, fried, and then cooked with egg and green onion. The vinegar soy and green mango are—in Vietnamese tradition—added to taste. Comforting and hearty, it's a truly astounding dish that we're excited to bring back to Dallas… for brunch.

Learning How to Make Coconut Milk

Producing our own coconut milk in-house has long been on the Malai to-do list. It's just a better, fresher product with more flavor, and doesn't contain the thickeners and additives you'll find in canned versions. But procuring the proper equipment in Dallas has been impossible. We decided if we were going to be serious about this, we needed to observe the process of making coconut milk firsthand. So we ventured to the rural Mekong Delta. 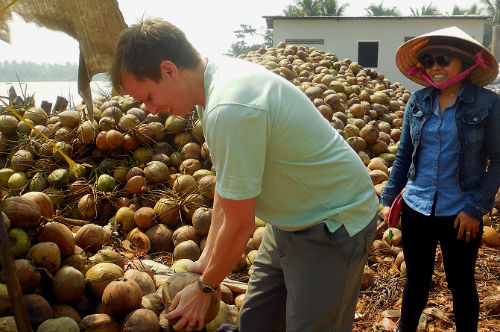 Between the tiny river boats and weaving bicycles, we discovered the most glorious and humbling things, one of which was a coconut processing plant. It needs to be noted that we use the term "plant" loosely: it was a bustling shed with five people, each responsible for a different stage of the process. One shelled the coconut, the next cut it in half and removed the meat, the next two shaved off the brown skin, and the last sliced it into pieces then soaked it in water before being processed into milk to be canned and shipped. The workers were paid by tallying up how many coconuts they cut or how many kilos of shavings they produced and were paid accordingly. No wonder the de-sheller was so willing to let us take a hack at it. But it's a sad reality when it takes 10,000 coconuts for the workers to earn $100.

Moved by the experience, we set out for Saigon to find equipment to bring back to Dallas. All we had was an address and a phone number for a place that allegedly sold what we needed. So with a map in hand and a wad of Vietnamese Dong, we ventured into the city. But when we arrived, the store turned out to be a men's clothing boutique. Some nearby kids noticed our quizzical looks and offered to help.

We showed them the picture of the machine we were looking for, and after a game of charades, they found a phone number for the previous tenant.

Realizing our dire need for a translator, we popped into a travel agent's office for help. Luckily, the angel working that day directed us to a market on the outskirts of the city that sold our machine. 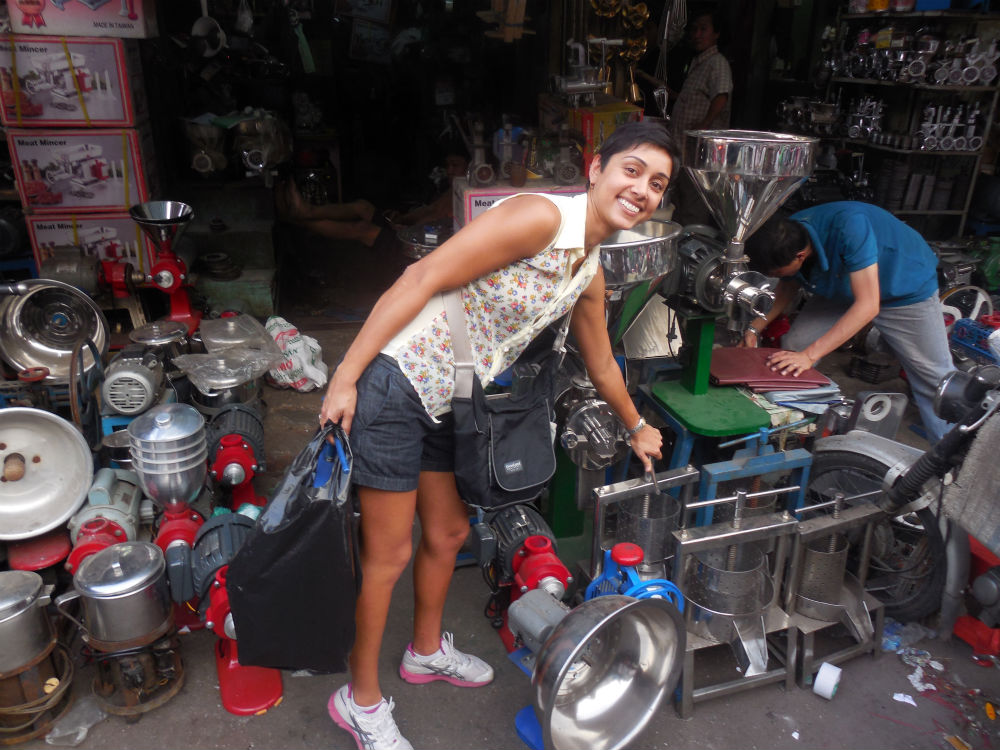 An hour-long cab ride later, we arrived at the packed marketplace. It took about three steps from the cab to join the human/motorbike stream of customers. And miraculously we found our way to rows of kitchen equipment stalls stocked with juicers, grinders, and coconut graters. We were like kids in a candy store – eyes wide, we could hardly contain our excitement. After another light game of charades with the shop attendant, we found what we needed.

We managed to smuggle this equipment back to Dallas, in one piece, to produce milk for our curries, soups, and desserts.

Practicing the Art of Rice Paper

In Ben Tre in the Mekong Delta, we were introduced to a lady who was famous for her rice paper. She invited us into her home to see the process and we quickly discovered she was a one-woman machine. She effortlessly steamed thin pieces of round rice paper over fire and laid them out to dry in the sun. After observing, we got in on the action. My motor skills and finesse were quickly humbled, and I decided to not ruin her whole batch. 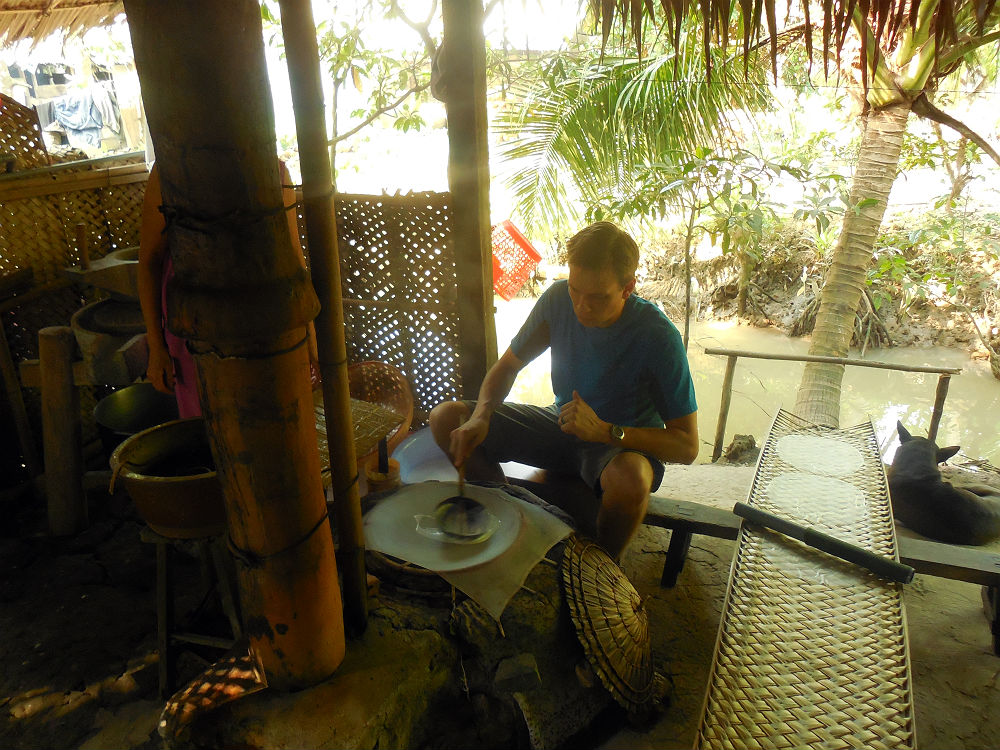 After the ordeal, her husband served us tea and her sweet rice crackers, an old family recipe that his mother passed down when they got married. But without hesitation he copied it down for us. I've been practicing that recipe since we got back, and I'm determined to get it right — so you can expect to see some legit rice paper on the menu soon!