After working with John Tesar first at The Mansion and now at Spoon Bar & Kitchen, award-winning pastry chef David Collier will also head up the pastry team at Knife, Tesar's modern steakhouse concept taking over the Central 214 space at Hotel Palomar. From lightening up portions to playing with texture and color, Collier is changing the way Dallas eats dessert. Eater recently sat down with Collier to talk about his working relationship with Tesar (hint: it involves a Star Trek metaphor), what to expect from the dessert menu at Knife, and more. (Also included is the pastry chef's "recipe" for his homemade dessert indulgence featuring fast food churros.)

Tell us how you got started in pastry.
I was one of those first crops of career changers — right before the Food Network came out and everyone was [high-pitched voice] "I wanna be a chef!" I went to this little winery school in Maryland, and they only had one program. I was a line cook for like three years and the first chance I got to do pastry, I kind of ran away and joined the circus.

On the current Spoon dessert menu there seem to be a lot of items in groups of threes — Three Chocolate and Caramel Textures, for instance. Is that how you usually compose desserts?
No. But I think if I'm plating something I tend to lean towards odd numbers as opposed to even numbers. Normally theory-wise with the desserts [at Spoon], John and I have said try and keep things as light as possible, because it's seafood. I tend to play with one, two, maybe three flavors max, but one of them is going to be Papa Bear [and be dominant.]. It's not conscious. It's just me trying to figure out what can I do with that, or how many ways can I do this? I never want to lose the focus of what the dessert is. In the Observer article about the White Album, [critic Scott Reitz] mentioned the size of our desserts — he's had some desserts the size of human babies. Ours are desserts that you have one spoonful and it's just enough.

Can you tell us the story behind "The White Album" on the Spoon dessert menu?
I was interested in making a monochromatic/white dessert and had been kicking the idea around for awhile in my head. The bowl and its resemblance to a record proved to be the catalyst. It fell into place very quickly after that. 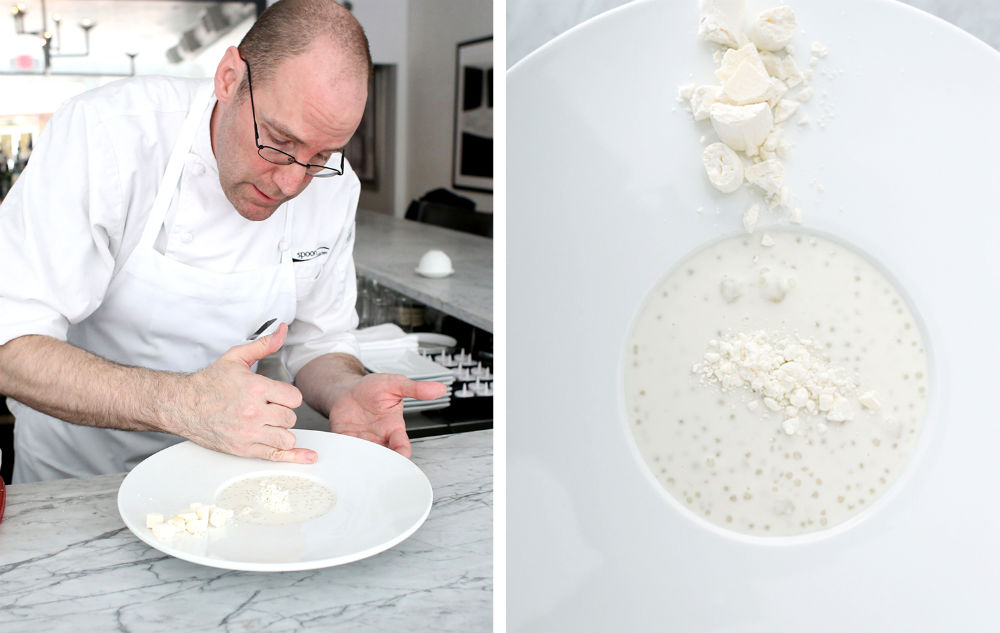 Spoon makes an effort to source sustainable seafood. Do you feel strongly about sourcing in regards to any of the ingredients in your dessert?
I trust my vendors/makers. I love Valrhona chocolate — I trust that it's not blood chocolate, that they're not destroying people's lives for 66 percent dark.

It's different with John, and savory chefs in general. It's their job to stay true to the [ingredients]. They take the Arctic char and they can serve it with things that can complement the char. There's a talent there that I could never possess. But at the end of the day, he didn't make the fish. Pastry, you start everything from scratch. That's part of what's attractive, since you get more input, but at the same time, that's where the challenge is. If you give someone a bag of flour and some eggs and some butter, there's 50 things you could make with that.

2013 brought us the Cronut craze. Do you keep an eye on food trends, or stay away from that?
I did for a while. I don't go out a lot, so I have to do some poking around on the internet. The people that really take that whole "intellectual property" thing seriously, like cronuts... that's crazy. [Putting your desserts out there] is how you inspire other people. We're not CEOs, we're not curing cancer, we're just making dessert!

I think it's important for people to have their own "style." [Cooking] is not a competition, it's YOU. I've always thought your style is a combination of your experiences, and your preferences, and your abilities. 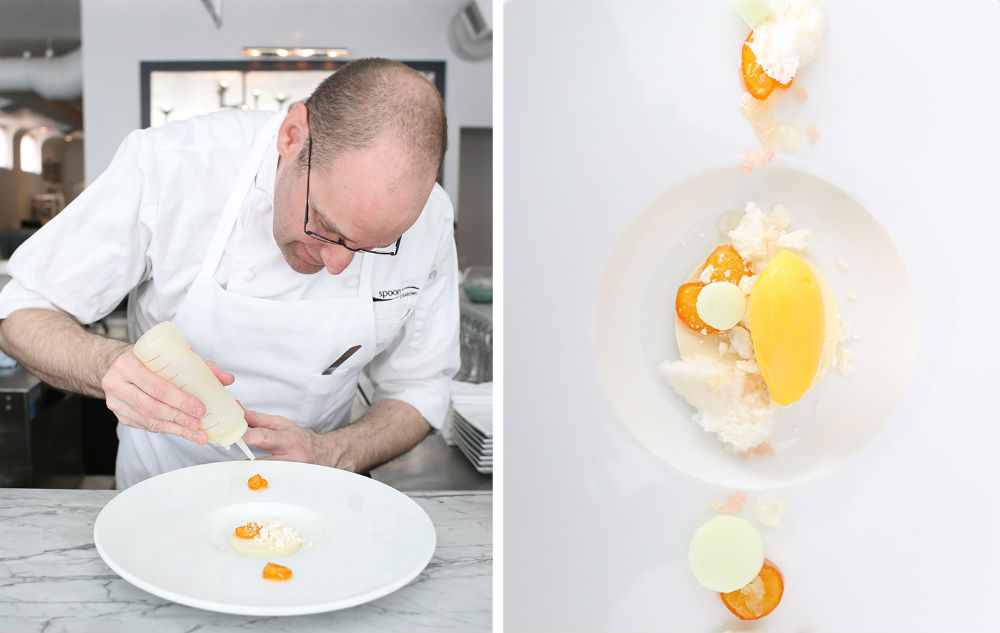 ﻿You've worked with John Tesar at The Mansion, at Spoon, and soon at Knife at Hotel Palomar. How do you two work together?
Since John and I are two older guys, in the sense of the [restaurant] game, I think we're both comfortable in our own skin. Our food matches well together. I lucked into that, and I'd like to think he thinks the same. We have the same kind of view that maybe there's one thing that should star over everything else on the plate.

John will always try everything before I put it on the menu–at the end of the day it's his restaurant and he gets final veto power. If I'm Biden, he's Obama. I come at him with a fully formed plate, and he can tweak something if he wants to.

I've always said that the pastry people are the science officers of the [Star Trek Starship] Enterprise. So we are Spock. There's a certain amount of OCD that you have to have. I was too organized and picky to be a line cook. John is Captain Kirk. He's flying through the galaxy. That's the closest approximation in pop culture.
﻿
Let's talk Knife. Anything you can tell us about the dessert menu right now?
Since this is a "modern steakhouse," I'm under the impression that the clientele [might include] some cool hipsters that like eating animals, and some business guys. So I came [at the dessert menu] from the angle that there are certain things that people will recognize as a steakhouse dessert, flavor-wise: cheesecake, creme brulee, an apple thing. If we can lighten, that, refine that, somehow modernize it, that's my job. People are going to expect a molten cake, but... [laughs] you can get that at Sonic, man! 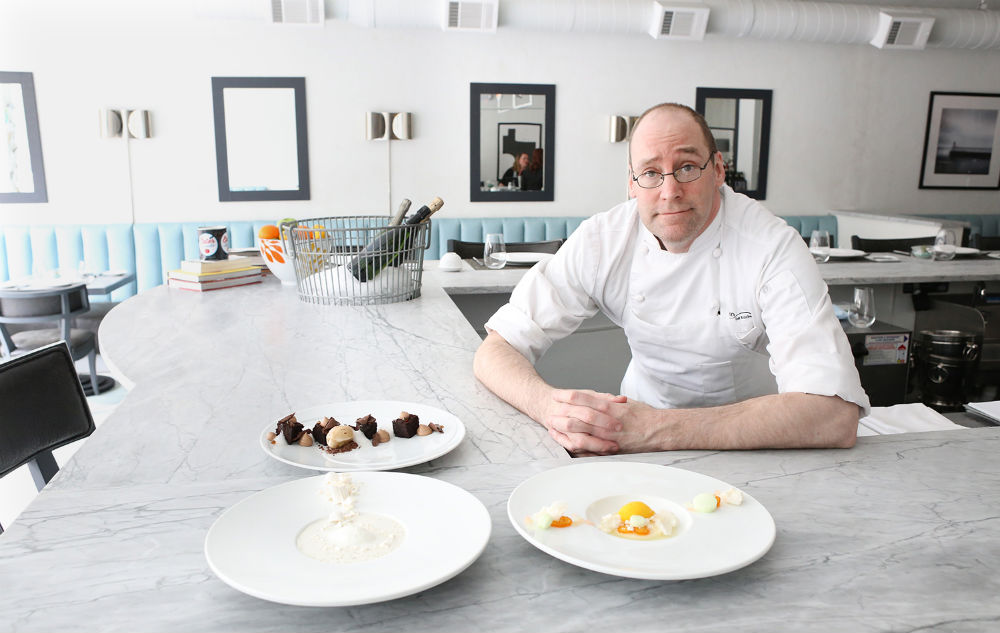 Collier poses oh-so-seriously with his handiwork.

I'd like to do something maybe like a graham cracker macaron with cheesecake mousse, so it's like a cheesecake, but not. John loves stuff in glasses. Maybe we look at chocolate dessert in a glass with lots of textures. The chef made a really great caramel, and I thought we could make a pretzel ice cream with that.

﻿Will you have any involvement in Tesar's other upcoming projects, like the fast-casual seafood restaurants and hotel restaurants in North Carolina and Memphis?
﻿As far as I know, I'm in it for the long haul. John's big on the partnerships. That's why I'm down here [in Texas] from Virginia. I'm glad we're over here. John be blowin' up, and he's taking me along for the ride. I'm grateful for that. He had had all these plans when I talked to him over a year ago, you know, for world domination. You know, Pinky and the Brain, which would make me Pinky and him the Brain.

When you crave something sweet, what do you eat?
If I eat dessert, I eat ice cream. I get that from my mom. I'm lucky enough that I can eat what I want. I made myself this horribly decadent ice cream sundae. Vanilla ice cream, those warm Taco Bell churro things, Cinnamon Toast Crunch cereal, and caramel sauce. Yeah, and you feel like you're going to die afterwards, but it's good.