Share All sharing options for: Calzone Showdown: The Elbow Room vs. GAPCo

Calzones might just be the unsung heroes of the pizza world. Instead of just putting that sausage and pepperoni on top of a round of dough, calzone-makers wrap all those delicious ingredients inside a buttery, crispy-yet-soft crust and bake it to bubbly perfection — well, hopefully.

Two East Dallas institutions — Greenville Avenue Pizza Company and The Elbow Room offer their own iterations of the grown up gourmand's Hot Pocket. Here, both these calzones are put head-to-head using a only-somewhat-arbitrary ranking system that evaluates each in five categories — crust, filling, overall taste, attractiveness, and value — and ranked them from one to five. In this system, one means inedible, and five? Calzone nirvana. 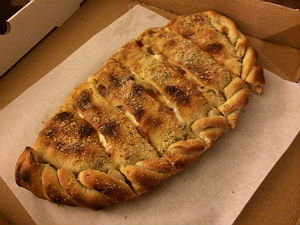 The online menus posted on the bar's website, Eat24, and ViewMenu.com all list different options for what's available, but don't be confused — you can build your own calzone here from a lengthy list of ingredients. A simple sausage and mozzarella calzone came out of the oven crispy fresh in just over 10 minutes.

THE CRUST: Light and springy with only a few slightly undercooked spots throughout. A topping of garlic and parm majorly adds to the crust appeal here. Rating: ★ ★ ★ ★

THE FILLING: The Elbow Room calzone was a little flatter than many, which was actually a good thing: The sausage and mozzarella were evenly dispersed through the whole calzone for uniform goodness in every bite. Rating: ★ ★ ★ ★

ATTRACTIVENESS: This was a pretty sexy calzone. The garlic and parm scattered across the top added visual appeal, and the crust was nice and golden. Attractiveness is kind of a shallow criteria, but really, who wants to eat ugly food? Rating: ★ ★ ★ ★

OVERALL TASTE: This was the better-tasting calzone of the lot, especially when considering that it was churned out so quickly. The flavors were nicely balanced without excess grease. Rating: ★ ★ ★ ★

VALUE: Ringing in at just over $10, this calzone is easily large enough to feed two moderately hungry people, especially when paired with a side salad. Rating: ★ ★ ★ ★ ★ 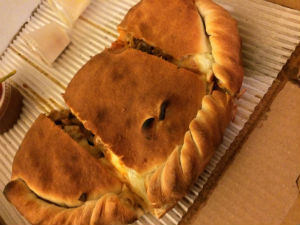 This popular late-night establishment has been serving up pizza to some of Dallas' drunkest Greenville dwellers for years. If you live in the surrounding areas, you can get a delicious build-your-own calzone delivered straight to your door. If you decide to do carry-out, you should plan to wait at least 25 minutes for your stuffed pizza crust delight.

THE CRUST: The GAPCo calzone crust was significantly more browned than The Elbow Room's crust, but unfortunately, it didn't mean that it was cooked quite as thoroughly. Where the dough was pinched to form the "pocket" for the delicious toppings, there were plenty of visibly undercooked spaces. That being said, where the crust was well-cooked, it was delicious. Rating: ★ ★

THE FILLING: I ordered a simple sausage and mozz calzone here, too, with one delicious addition — ricotta cheese. Unfortunately, the ricotta just served to make the crust a little soggy, and it wasn't evenly dispersed throughout the entire 'zone. The sausage, cheese, and sauce were flavorful, though. Rating: ★ ★ ★

ATTRACTIVENESS: This calzone was frankly a bit ugly. The crust looked over-browned, and the ends weren't pinched together well enough to keep the toppings and sauce locked neatly inside. The crust was a little more delicately crimped than The Elbow Room's, giving it a little aesthetic boost. Rating: ★ ★ ★

OVERALL TASTE: This is kind of where GAPCo's calzone sort of redeemed itself. The flavors were balanced nicely, and the sausage used was obviously high-quality. The sauce had a weird little twang, but it was ultimately just middle-of-the road as calzones go. Rating: ★ ★ ★

VALUE: The GAPCo calzone was slightly pricier than The Elbow Room at around $11, and significantly smaller, weighing in at about 6 ounces less than the massive calzone from The Elbow Room. Still, it's enough for two portions, assuming that you're enjoying it for lunch or a late-night way to sober up. Rating: ★ ★

THE CHAMPION: The Elbow Room

The Elbow Room may be more of a dive bar than a swanky Italian joint, but these folks clearly know their way around a calzone — and it certainly doesn't hurt that they'll put one in your hot little hands in about ten minutes.