Mushroom Cocktails are Officially a Thing in Dallas

Share All sharing options for: Mushroom Cocktails are Officially a Thing in Dallas

It may sound a little weird, but a couple Dallas bartenders are getting funky with fungi-infused cocktails. In New York, savory cocktails have been a full-fledged trend since at least 2010, and it looks like this fad has finally made its way down south — we're going to be seeing a lot more fungus amongst Dallas bar menus.

At Matt McCallister's FT33 in the Design District, bar manager Lauren Festa has welcomed mushroom-infused cocktails to the city in a bold way. To make the cocktail, called a Truffle Pig, Festa combines DeLeon tequila with lemon juice, a honey simple syrup infused with chanterelle mushrooms that have been powdered with liquid nitrogen, and seared and raw maitake mushrooms. The finishing touch — a huge shiitake garnish — drives home the cocktail's intense, earthy flavors.

Somewhat surprisingly, the Truffle Pig is one of the restaurant's best-selling cocktails, and they've got more 'shroom-flavored libations in the works, too. A candy cap mushroom-infused rum is currently aging at the restaurant, and should show up on FT33's cocktail menu "very soon." 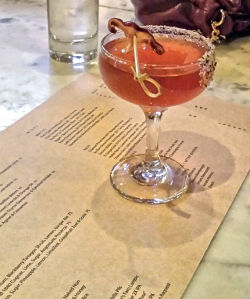 Victor Tangos on Henderson Avenue takes a more subtle approach to fungi-flavored cocktails. Bartender Alex Fletcher's Lost In Translation features a complex mushroom-thyme demerrara sugar syrup, cooked to a rich reduction over two hours. When asked what made him decide to try his hand at a mushroom cocktail, Fletcher said that he wanted to create an "umami bomb," and with the demerrara, he definitely succeeded. I tried just a taste of the demerrara on its own, and it could easily have also been a savory sauce for fish, or as he suggested, scallops.

The demerrara is paired with a pure malt Japanese 12-year whisky, adding to the complexity of the cocktail. Cocchi di Torino, a pungent vermouth, serves as the lone hat-tip to a traditional Manhattan. A sesame seed & salt rim adds interesting texture, while a briefly heated (with a torch — by his own admission, Fletcher is a "bit of a pyro") lemon peel leaves a citrusy aroma.

According to Fletcher, he opted for oyster mushrooms in the final version of the Bill Murray-inspired cocktail's base because shiitakes were "just too funky." He does, though, use a candied shiitake to garnish the cocktail.

So who's ordering all these fungi-infused drinks? Is it strictly relegated to the adventurous food-obsessed types who Instagram their every sip and bite, or are "normal" people giving it a try too? "I think novelty is the starting point," Fletcher said, "But people always come back and request it."

Mushrooms are definitely a unique ingredient for bartenders to use because "earthy" isn't necessarily a flavor many people expect to consume from a cocktail glass, but after tasting these two cocktails, it looks like this trend has legs.