Got any Conan-related intel? Hit us up via the tipline. 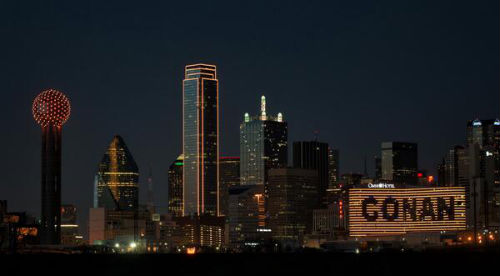 Ginger funnyman Conan O'Brien is in town filming a week's worth of his late-night show at Majestic Theatre, and Conan madness has fully enveloped the city of Dallas, as evidenced by the hordes of people descending upon downtown in hopes of snagging tickets.

The late-night host has apparently taken a liking to Oak Cliff: He was spotted at Mesa over the weekend (perhaps Jay-Z and Beyonce recommended it?), and word surfaced last night on Facebook via CraveDFW's Steven Doyle that the pompadoured host dined at Bolsa.

Deep Ellum's Glazed Donut Works created some customized doughnuts for Team Coco and delivered them to the set yesterday: The Conan is "a white chocolate donut topped with a bright orange house made marshmallow infused with Grand Marnier, and the Candied Richter is "topped with dark chocolate and loaded with bourbon candied bacon."

Other restaurants like The Rustic are inviting the TV host to come sample their wares via social media:

Tune into the show, which airs at 10 p.m. CST on TBS, to stay abreast of all Conan's Dallas antics, or watch the #ConanDallas hashtag on Twitter.