Dean Fearing on His New Book, The Texas Food Bible

Share All sharing options for: Dean Fearing on His New Book, The Texas Food Bible

Below, local legend Dean Fearing discusses his new cookbook The Texas Food Bible. For more, head over to Eater National for a sneak peek inside the book. 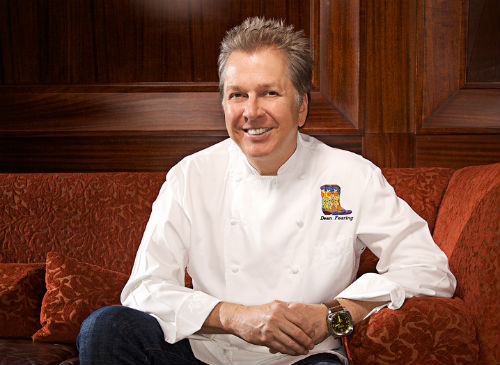 It's a pretty bold move to name your cookbook The Texas Food Bible, but if there's anyone qualified to pen such a title it's probably Dean Fearing — after all, they don't call him the "father of Southwestern cuisine" for nothing.

The chef's newest cookbook, which hits shelves April 29, is a comprehensive collection of recipes encompassing everything from chilaquiles and traditional Texas chili to fried chicken and street tacos, and of course, his beloved tortilla soup that he first made famous at The Mansion on Turtle Creek. Devotees of the modern Texan fare served at his eponymous Ritz-Carlton restaurant will find plenty of that between these pages, too, including Dublin Dr Pepper-braised short ribs and maple-black peppercorn buffalo tenderloin with butternut squash taquitos.

Eater recently caught up with Fearing to chat about his new book — including what his yoga teacher thought of it — and what he thinks the official state dish of Texas should really be.

So major congratulations on the new book. How long has The Texas Food Bible been in the works? It seems like you've probably been collecting these recipes for practically your entire career.

Right, there's a whole bunch of great recipes in there that are very traditional and that have been around with me forever. Then there's of course the modern recipes from the restaurant entwined in the book, because I think that's an important part of showing modern Texas cuisine along with the more traditional Texas cuisine. And I think having smoking recipes, grilling recipes, definitely all the south of the border style recipes, is important to that whole concept of Texas as a melting pot.

It's funny, for as long as Southwest cuisine has been out, so to speak, in the public, it's still relatively new. It's a 30-year-old cuisine that some people still don't know a lot about. For me, it's always about still carrying the Southwest flag forward. It never seems to get old. It's always new and refreshing because there's somebody in this country that comes to visit the restaurant that's never experienced it. As much as I say I've been serving tortilla soup for 30 years, it's still, to somebody, brand new. I love it because it's what draws people into the restaurant — you know, some people are like "I started thinking about tortilla soup and I needed a bowl so bad, I had to come in." So it's become a classic taste for a lot of people, that they need that fix, like people need a pizza fix or a pasta fix or whatever.

And when you say what is the future, it just keeps evolving. Are we still using the same chiles we always have? Sure, but we're using them in different ways. A lot of it is combinations — embracing new combinations of flavors. That's the evolution of food in general I think. So what's the future? The future is bright. It's still an unknown cuisine to a lot of people, and for those people to discover it, it's amazing. On the other step, when you see McDonald's doing a chipotle barbecue sauce, I'm tickled because it's like wow. [laughs] Here's Southwest cuisine in the mainstream, but yet people still don't connect that flavoring necessarily to the four or five people in Texas that really started that whole flavor aspect 30 years ago.

I was impressed by just how many recipes are jam-packed into this book. The sheer amount of information in the book can be a little overwhelming at first glance, especially with some of the multi-component recipes, so where would you suggest people start?

Judy Choate, who was my editor for the book, we had a big discussion, almost slash fight, over why we would start the book with a section on sauces, salsas, vinegars, that kind of thing. I was like you know, is that really where it needs to be? And she said yes. She said we need to start the book with sauces and salsas so that people can see what they want to do before they get into the book, to know that there's all this information on all these different sauces. So my yoga instructor — I do yoga every Monday and Friday with him, and I had the book out on the table. So I was in a pose for a little bit and he said hey, I'm going to look at the book. And all of a sudden he was like, oh my god! This is great! I can pick the sauce that I want to do [then choose] item that I'm going to be cooking. So Judy was right, and here's the prime example — my yoga instructor is loving the fact that all the sauces are right here in the front. So that's definitely a great place to start.

There are several different chili recipes in the book, and you mention that real chili should not contain beans nor should it contain tomatoes. On that note, do you think chili makes sense as the national dish of Texas? Some people have argued that that title should belong to barbecue.

In a modern way, yes I think it should be barbecue, because I think that's what we've grown into. But I think in a traditional way, I think all the youngsters have forgotten that Texas was this chili nation at one time and had chili parlors. Every city had a chili parlor. The owner of that parlor took pride in that recipe of what he thought chili was. They all had various recipes — spicy not spicy, darker, lighter, all that — but I think if it's going to be the traditional part of Texas then it still has to be chili. My son's generation could care less about chili. The generation behind me was probably that real chili generation — the 30s, 40s, 50s, Texas was all chili. It's kind of outgrown that. I don't know if you remember Tolbert's which used to be on McKinney Avenue where Chuy's is now, but that was really the last of the Texas chili parlors. And that ended probably in the late 80s. But in the modern sense, I would definitely say it should be barbecue.

You mention in the book's introduction that in 1979, it was difficult to even get something like cilantro. It's interesting to see how things like that, once considered "ethnic" ingredients have become so commonplace. Are there things that you guys are utilizing now in the kitchen that are sort of elusive or lesser-known, that you think will be more mainstream in the future?

Well, I think that we're seeing it already — a great example for me is my mother and family lives in Louisville, Kentucky. I was going to cook dinner [when I was there] and when I went into the produce section of Kroger in Louisville, there's cilantro, jalapenos, jicama, mangoes. So a lot of the indigenous ingredients that we started Southwest cuisine with, have covered the country now. And if you think about it that's a big deal for a big company like Kroger to say okay, we're going to bring jicama into Louisville, Kentucky. Let's see what they do with it. Don't you find that interesting that we're seeing all these indigenous Texas products starting to cross the country? And also what I see getting bigger is barbecue. It's already big, it's big here and we love it but we're starting to see barbecue places crop up all over.

Oh, it's unbelievable. And you know I remember when there was only a few little [barbecue] places in New York and they were pretty bad. Now you're starting to see this whole generation of barbecue people coming up, a younger generation that says you know, we're going to do some really good barbecue. And it's not just New York — go to say, Des Moines, Iowa and there will be a good barbecue joint there. I think the whole street taco, which of course we love here, is definitely making it's march across the country too.

And we haven't even talked about the whole grill aspect — I tell you, more chefs are building wood-smoking grills and real fire grills these days. We burn mesquite at the restaurant and it's not uncommon for me to be in any city [in the country] now and a chef is burning wood for his proteins or his vegetables, which was just unheard of [10 or 20 years ago]. Everyone was using gas grills.

So you have a pretty sizeable cookbook collection yourself. Any books in particular that you count as favorites or standouts in your collection?

I have a vintage cookbook collection, and then I've got a pretty big collection of modern books. I wanted a better understanding of American cooking in the 1800s so I started collecting all of these [vintage books] when I could find them. Then Garden & Gun magazine did an article on my book collection and then I'm not kidding you, I started receiving from all over the South cookbooks from grandmothers, some grandmothers who had passed away and their sons or daughters were sending in their cookbooks, from all over the country. I started receiving cookbooks from the late 1800s — Virginia, Boston, all these cookbooks that people who saw the article wanted to give me. Now is that not the greatest thing in the whole wide world? Unbelievable. And of course some of the books are so brittle, to where I have to be really careful with them, because the pages will break. My oldest one is from around 1867. So now I have this much more vast collection, from all different regional areas of the South.

Obviously the books from the 1800s are really interesting because the recipes, they read differently than they do nowadays. They'll be like, 'when you kill the hog, the wind has to be from the North.' And of course I had no idea what that meant, till somebody told me that the wind from the North meant wintertime, because you wouldn't want to kill the hog until all the fleas were dead on it. So they weren't written like they are today, I have some cookbooks where the entire book doesn't have one cup, tablespoon or teaspoon amount in it. It's interesting to see how cookbooks have evolved from the early days when it was mainly just talking points.