Kung Fu Saloon's claim to fame may be arcade games and skee-ball, but the mini-chain of Texas bars is steadily becoming infamous for something else: A door policy that many patrons say is racist. Would-be bar customer DeAndré Upshaw says he was turned away from the bar's Uptown location yesterday under the guise of a dress code, but that the real reasons are racially motivated.

Upshaw, a social media manager and writer, tried to join a group of friends who were already inside Kung Fu Saloon on Sunday afternoon, but says he was turned away by the bouncer for wearing Converse hightops, which are apparently verboten since they're "athletic shoes." 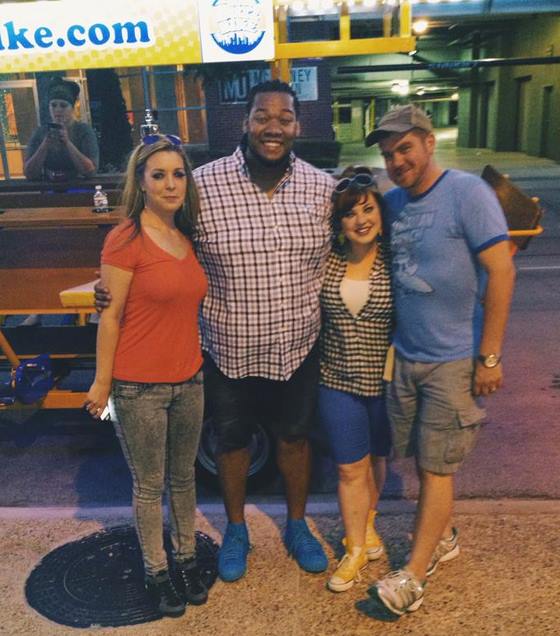 The last time anyone actually worked out in Chuck Taylors was probably the mid-1970s, but sure. The real problem, Upshaw says, is that two of his friends — who are white — that were already inside were wearing the same type of shoes and got no grief from the same bouncer.

Upshaw went on to say that a black couple behind him were also turned away, ostensibly for wearing shorts, which are apparently also against the bar's dress code — despite the fact that several patrons inside were wearing shorts as well.

Upset, Upshaw and his group of 12 friends left the bar; on the way out, he asked the bouncer why high-top shoes were banned, and learned that Kung Fu Saloon's dress code "changes often." Moments after leaving, Upshaw called the bar and left a message to complain about the incident. He says he quickly received a phone call from someone claiming to be the manager, who told him he was upset that Upshaw would dare imply that the bar's dress code is discriminatory, and that the bar "isn't racist."

It's certainly not the first time that Kung Fu Saloon has been accused of discriminatory door practices. Over the past year and a half both the Austin and Houston locations have been publicly accused of allegedly denying entry to minority patrons under the guise of dress code violations, and as Central Track pointed out last summer, a quick glance at the Yelp reviews for the Dallas location reveals a similar pattern of accusations.

Upshaw says he and his friends will never go back — and they'll make sure no one they know goes back, either. His Facebook post about the incident is spreading, and as a marketing professional with more than 13,000 Twitter followers, it looks like the news could travel fast.

Upshaw says the manager told him that the bar's dress code changes at 1 p.m., and that the people already inside wearing clothes that violated the code might have arrived before the switchover. Upshaw says this seems fishy, since the whole incident took place at about 6 p.m. — meaning that the people inside sporting shorts and hightops would need to have been camped out inside the bar for five hours or so. The common denominator, Upshaw says, is that those who violate the so-called rules but still make it inside aren't black.

Eater has reached out to Kung Fu Saloon for comment and will update with any further info.

UPDATE: Eater has received a statement from Kung Fu Saloon. Whether it's about this incident or not remains to be seen.

Management of Kung Fu Saloon is currently investigating a claim that an employee of the company made an inappropriate comment to a customer trying to gain entrance to the bar wearing unacceptable attire. Management will determine whether the comment was racially motivated and if so, appropriate disciplinary action will be taken. Kung Fu Saloon is home to one of the most diverse crowds in the Dallas bar scene – a reputation that we value and cultivate. It is not the policy of Kung Fu Saloon to deny any customer entry based on race or ethnicity. Our aim, as always, is to continue to provide a fun, safe and welcoming atmosphere to anyone, in keeping with Kung Fu Saloon policies.

DeAndré Upshaw, center, who was denied entry for his shoes, is flanked by friends who had no trouble getting in. [Photo courtesy of DeAndré Upshaw]