Share All sharing options for: Denton City Councilman Kevin Roden on Why the Sriracha Plant Should Move to Texas

In the wake of his enthusiastic campaign to convince the Huy Fong plant to move from its currently-contested California location to Texas, Sriracha-obsessed Denton City Councilman Kevin Roden received a letter from Huy Fong Foods this week inviting him and a few other town representatives to tour the chili sauce giant's magical factory in Irwindale, California.

No word yet on whether the company actually plans to move their factory to Denton after being hit with a string of lawsuits in Irwindale, but Roden plans to make the North Texas town look as appealing as possible. In the following interview, Roden discusses his #sriracha2denton campaign and what he feels like town has to offer Huy Fong (and vice versa).

Obviously, when you started this campaign you didn't really expect to hear a response from Huy Fong. Were you blown away when they actually contacted you?

We had already communicated with the company back in the Fall when we first launched our #sriracha2denton campaign. Since then, things have gotten worse between the company and the city and they finally got to the point of seriously considering a move. Our push in the Fall put us in a great position now to jump in and make the case for a move to Denton. I'm very happy to get to go to California and share with them the great news about doing business in Denton.

Whether or not you like the label, you're quite often referred to as a "hipster" politician. Did the popularity of Sriracha with young people in Denton drive your plan, or was it pure timing?

There is certainly a connection between the brand of Sriracha and the people here in Denton. It's not often when you can connect citizens to specific economic development efforts, especially when you are focusing on industrial companies. Sriracha is one of those rare industrial companies that also has a very big fan following. It's a perfect match for Denton.

What are the best plans you've heard so far from the people of Denton for drawing the company to our town? What do you think is a good strategy?

We want to demonstrate the creativity talents of of our citizens, so we'd like to see a grassroots effort to demonstrate that. In addition to showing them great locations, our excellent transportation and logistics situation, and our welcoming business environment, we want them to see a town full of smart, tech-savvy, creative people who are ready to make Denton a new home for Sriracha. Toward that end, we are hearing ideas for websites, logos, videos, music and more.

People are wondering about the environmental factors causing the factory to leave California. What's the bottom line on these risks, and how will Denton address them, if need be?

We need to distinguish between air pollution in the traditional sense and the irritation that follows from grinding tons and tons of jalapeños and onions during their harvest period. There have been absolutely no claims, and no findings following state inspections, of harmful, toxic emissions coming from the plant. There have been, however, exactly four households out of the entire city who have complained about irritation due to the grinding of these vegetables.

If you look at the satellite picture of the plant in Irwindale, notice the neighborhood immediately surrounding the factory. Then look at the next picture of Denton's industrial area off Airport Road near the Peterbilt plant. They could be set up in a spot that's nowhere near the nearest neighborhood.

So we're dealing with nuisance issues — not environmental issues. And those nuisance issues can be easily dealt with by finding a proper place for them far away from neighborhoods. 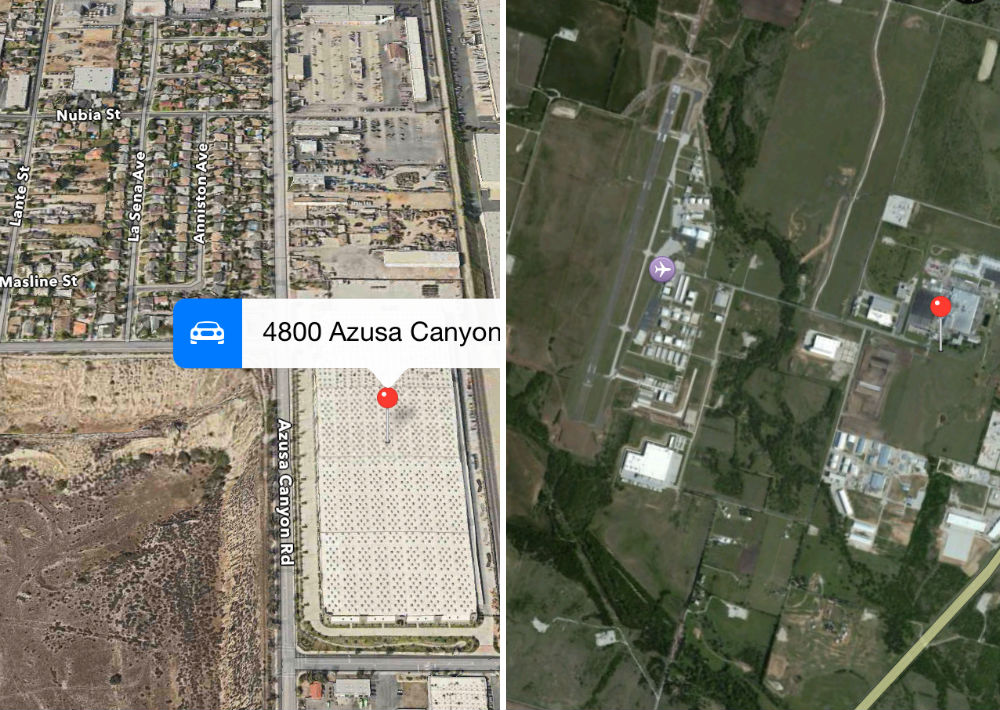 The current site of the Sriracha plant, left, vs. the proposed Denton site. [Images via Kevin Roden]

What would Huy Fong moving in bring to the town, and what can Denton offer them?

Can you imagine Denton as the home of Sriracha? What that offers us, in pure marketing terms, is priceless. But there's more — they'll bring jobs, opportunities for partnerships with our universities, the impetus to grow our agricultural sector, and significant property tax revenue on what is now ag land. We can offer them a business-friendly environment, a city who loves them, a great workforce, and the best location in the United States.

One more question: What's your favorite thing to put Sriracha on?