Share All sharing options for: #NoKungFu Supporters Will Rally Tonight in Uptown

Two days after social media manager DeAndré Upshaw experienced what he calls a discriminatory incident at Kung Fu Saloon in Uptown, the movement against the mini-chain of Texas bars is still moving quickly, with a rally planned for tonight at MoMo's in Uptown. After an initial response from the bar that seemed both half-hearted and confusing, Kung Fu Saloon issued an official statement yesterday through their Facebook page. The statement was posted soon after a few of Upshaw's supporters pointed out that maintaining a dress code at a bar or club that is not publicly posted is actually illegal under the Dallas City Code.

Kung Fu Saloon, employees, and patrons are to present themselves in an appropriate manner which is conducive to a productive, safe and fun environment. Administration has the final authority about dress code compliance. In accordance with Kung Fu policies, employees and patrons may not wear:

• Improperly fit clothing; baggy pants, overly tight clothes, or clothes that expose body parts or undergarments.
• Boxer shorts, sweat pants, or athletic shorts
• Undergarments, pajamas or other clothing not designed to be worn as an outer garment
• Gang associated clothing or colors
• Emblems or writings that are obscene or that may reasonably be expected to cause a disruption of or interfere with normal operations
• Clothing advertising, condoning, depicting, or promoting a controlled substance, violence, or displaying vulgar or suggestive language
• Clothing or items that promote discrimination or intolerance of any group based on race, religion or sexual orientation
• Accessories, which are weapon-like, such as metal-studded collars and arm / wristbands
• Any item with graffiti including of backpacks and other items on the personage


It's probably worth pointing out that this dress code says nothing about shoes, which was the alleged reason that Upshaw was refused entry to the bar. Also notable is the fact that a large portion of it is copied directly from the dress code of the Austin Independent School District. The bar's public relations company is located in Austin, so perhaps its employees just look back on their high school days so fondly they wanted to rehash the dress code? Upshaw, on the other hand, isn't satisfied and says this statement is simply another denial of wrongdoing from the bar's management. His thousands of supporters seem to agree.

The hashtag #NoKungFuDallas, recently changed to simply #NoKungFu, has persisted on Twitter as Upshaw's supporters rally to spread awareness of what they call racist dress code enforcement by the bar's employees. In addition to multiple news articles that have appeared over the last two days, Upshaw has already appeared on Fox 26 in Houston and radio station 105.3 The Fan to discuss his goals in bringing awareness to the hundreds of incidents minority patrons claim to have experienced at the Dallas, Austin and Houston locations of the bar. 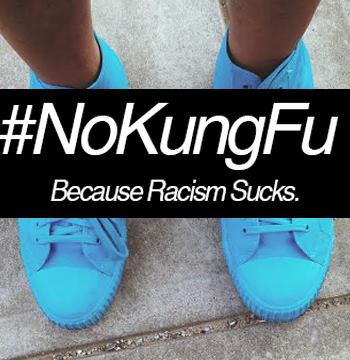 Tonight at 7 p.m. Upshaw and supporters will gather at MoMo's Italian Restaurant in the Quadrangle to call attention to the incident and try to raise awareness on a national stage through photos and social media. Since Upshaw was barred from entering the Kung Fu Saloon for wearing hightop Converse sneakers, supporters from Dallas and across the country are being asked to send photos of themselves wearing hightop shoes or other articles of clothing allegedly cited by the bar when refusing access to minority patrons, such as shorts, camo or shoes without socks. Upshaw also asked participants to label the pictures with #NoKungFu and change their profile pictures on social media in support.

Upshaw hopes tonight's rally will bring national attention to the controversy, and based on the huge numbers of people that have RSVP'd to the event, it's certainly possible.