Top cocktail whisperer Michael Martensen is behind the cocktail menu at John Tesar's recently opened Knife at the Hotel Palomar, but some of the drinks on the list might come as a surprise to craft cocktail aficionados — think liquid relics like the Long Island Iced Tea, Sex on the Beach, and Planter's Punch, none of which have really been a part of the classic cocktail revival of recent years. So why the decision to feature said drinks — which Martensen refers to as being born out of the "dark ages" of cocktails — at Knife? "I think the room kind of speaks to these drinks," he says. "The room is very 70's contemporary, so that definitely played into [the menu design]. Some restaurants in the area are still actually offering those drinks on their cocktail menu... So we wanted to do these drinks that you still see at certain bars but to do them right and put my spin on them." 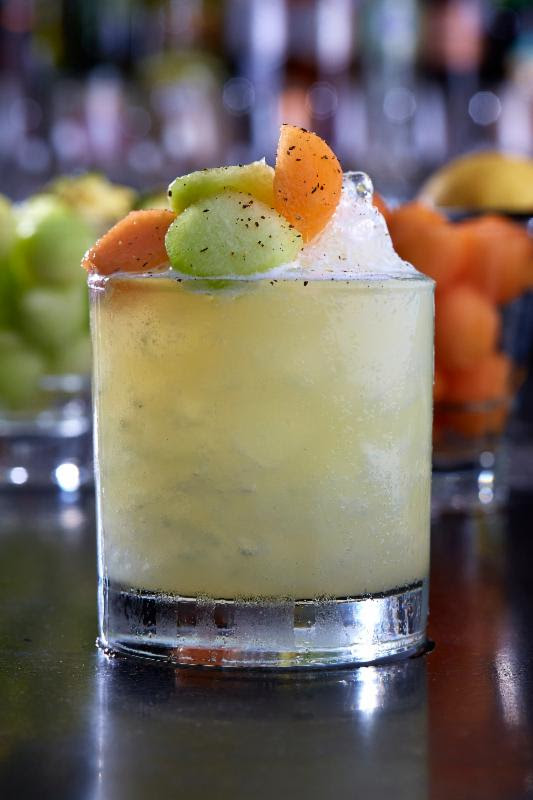 Doing said cocktails Martensen's way means tossing out the sour mix and syrupy-sweet liqueurs in favor of fresh ingredients and infusions. In the case of the Melonball, for instance, the neon green liqueur has been swapped out for mezcal infused with honeydew and cantaloupe. His Sex on the Beach includes fresh orange juice and housemade grenadine, and he's even reviving that most-maligned of drinks, the Long Island Iced Tea, which is typically drunk not for its taste but rather for its potent punch to the face. So what exactly makes Knife's Long Island Iced Tea "artisanal"?

"Traditionally the Long Island Iced Tea was always made with sour mix, so we get rid of that completely and stick with fresh lemon juice," Martensen explains. "Then you don't just grab your plastic bottle wells and toss all the booze in there. Instead, we're using a dry curaçao from Pierre Ferrand, a good London dry Beefeater gin, a great four-year rum, Flor de Cana, and a traditional Russian vodka, Smirnoff. Shake that all up and then use just a little bit of sugar in it, because you also use Mexican cane sugar Coca-Cola which is sweeter that regular Coke. You find that happy balance between all those and it's delicious. Then you serve it in the most obnoxious glass you can find — we use a 15 ounce hurricane."

Martensen's menu is also catering to more modern tastes with a lineup of original concoctions including the Able Apple, a gin and apple brandy number garnished with celery, and the OIM, a martini made with olive oil-infused gin, vermouth, chartreuse and sea salt. The bar staff at Knife also encourages choosy patrons to "build their own" drinks by customizing every aspect of their order. Something as deceptively simple as a martini can be made an almost infinite number of ways, depending on the spirit choice, the mixing method (shaken, stirred or tossed), the garnish and whether the guest wants it dry or wet, to name just a few variables. It's all part of Martensen's educational approach to making drinks, he says: "If you lay it out for the guests and walk them through it, it all of a sudden opens up their minds. We want to get rid of all the variables and figure out exactly what the guest wants."

Knife is also taking a very serious approach to the gin and tonic, which Martensen proclaims "one of the top five cocktails in the world." G&T drinkers at Knife can have an American, English or Spanish version. As Martensen explains, the American is garnished with lime, the English with lemon, and the Spanish with various botanicals like kaffir lime leaves or juniper berries — "stuff that's going to be very aromatic." The American and English varieties are served tall in a Collins glass, while the Spanish is served in a stemless wine glass. To take the customization further, Knife's bar also boasts at least four different kinds of tonic water including Fever Tree, Tomr's and Fentiman's, plus Martensen says he's currently awaiting a delivery of cinchona from which they'll be concocting their own house made tonic.

The cocktails listed on the menu clock in at between $11 and $14 and there's also a special bar menu that's offered from 2 to 5 p.m. and includes some entry-level options like a $9 hot dog with housemade 'kraut or a $12 liverwurst sandwich — or on the slightly fancier side, a $24 ham tasting and an $18 lobster pizzette. Scope out the full cocktail menu, below:

Reimagined retro cocktails:
Amaretto Sour - elevating this from the usual cocktail made with sweet and sour mix, Knife uses fresh lemon juice, amaretto, simple syrup and adding an egg white for texture and a dash of angostura for aromatics
Sex on the Beach - a very simple drink served tall with vodka, fresh orange juice, peach liqueur and housemade grenadine with hints of orange blossom, cardamom and cloves to bring this staple to the next level
Harvey Wallbanger - invented by a Southern California surfer, this simple cocktail is made with fresh orange juice and vodka with a modern spin of Galliano Foam on top
Long Island Iced Tea - known mainly for the amount of booze mixed to make the drink, this is Dallas' first artisanal Long Island Iced Tea with rum, gin, vodka, triple sec, a touch of lemon juice and splash of Sugar Cane Cola
Melonball- changing out Midori for honeydew and cantaloupe house-infused mescal, fresh pineapple and lime juice and a pinch of sea salt
Planter's Punch- First written about during the 1870's. A Jamaican potion of rum, lemon juice, our housemade grenadine and bitters not to sweet yet tastes of the tropics. Very boozy and the perfect drink to send you on your liquid vacation.
Alexander - dating back to the 1920s, this rich after-dinner drink is a must in any classic dining establishment, made with gin and brandy, then mixed with sweet cream and artisan crème de cacao