James and Amy St. Peter began selling their unusual doughnut creations out of the back of their car back in the summer of 2010 and quickly gained a rabid following thanks to word of mouth. Since Hypnotic Donuts opened the doors to its White Rock-area shop back in early 2012, doughnuts have become one of the trendiest foods in the country. In Dallas, though, Hypnotic has been leading a very small scene of artisan doughnut shops with creative, inventive flavors that still often draws a line going out the door.

Nearly two and a half years later, Hypnotic Donuts is stronger than ever, and a second location in Denton is currently under construction. Eater sat down with mastermind James St. Peter to talk about what he's learned in four years of making doughnuts, the upcoming location in Denton, and why selling out just isn't smart.

How was Hypnotic Donuts' second year at the shop compared to the first? Easier or harder?
I think the biggest difference is the learning curve. It's amazing the things you learn. How to be more efficient, how to manage inventory, we had to learn how to do all of those things. I think us being able to make the process more efficient has really helped us have better interaction with our customers, and it's really helped us grow our business.

So less running out in the early mornings, more selling doughnuts all day?
We used to think it was so cool to be sold out of doughnuts, but then we realized that it was actually really stupid. Why would you ever want to run out of inventory and not be able to make money? And having to turn down all these people that come to our shop. When we're sold out, we're "souled out." So that's a little different.

What about the menu? Do you feel like you were able to open up a little more creatively in the second year at the shop?
Yeah, I think in the first year we came out and we were trying to get our names out there. My ego was also involved. We always had people from cooking schools like Le Cordon Bleu come apply to work here, but I honestly didn't want them here because I knew they would know more than I did and I didn't want to look like an idiot. I finally just swallowed my ego and hired some people that went to culinary school, and they have really changed what we are able to do. We're getting a little more sophisticated in our offerings. 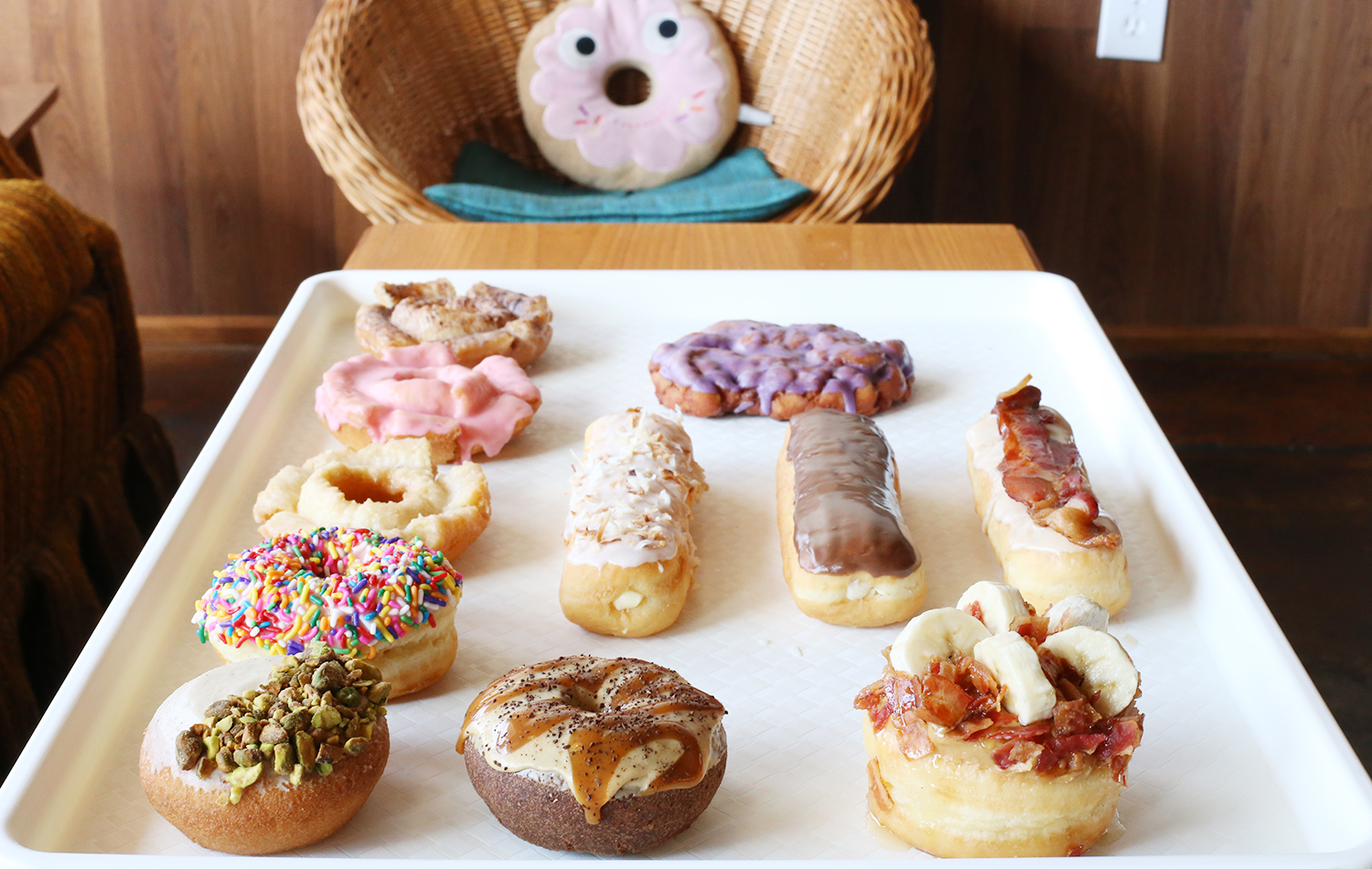 What has been your most popular doughnut throughout the past two years? Did it change from the first year to the second?
That's funny because we put a contest on Facebook to help us design a doughnut, and it was Jenny's Evil Elvis — peanut butter, banana, bacon, and honey. It's one of those things that people walk up to the case and either think "that looks awesome," or "that looks awful." The flavor is awesome, it's just a monstrosity of a doughnut. But it's been the most popular doughnut since day one, probably because it's so ridiculous. The initial thought is "I've got to buy it just to try it," but once you try it, you keep coming back. I've got bodybuilders who come in here and buy six at a time.

Aside from the doughnuts, what have you done with the rest of the menu to make it different in the last year?
I'm not going to go into too much detail, because I'm sure someone will copy what we're doing here. The biscuits have pretty much stayed the same. We added the Jim biscuit, which is sort of our play on chicken and waffles. We actually do sell out of that a lot, because we use a specially cut, yeast-risen doughnut that takes a few hours to prepare. We've also continued to do a biscuit of the month with a chef in Dallas. We invite them to come in and design a biscuit for us, and that's been really cool. We've had Bolsa Mercado, Cane Rosso, Pecan Lodge come in and make their own. Right now, we have The Grape's Chef Brian Luscher's Post Oak Red Hots on a biscuit, and that is just really good. It keeps things different. 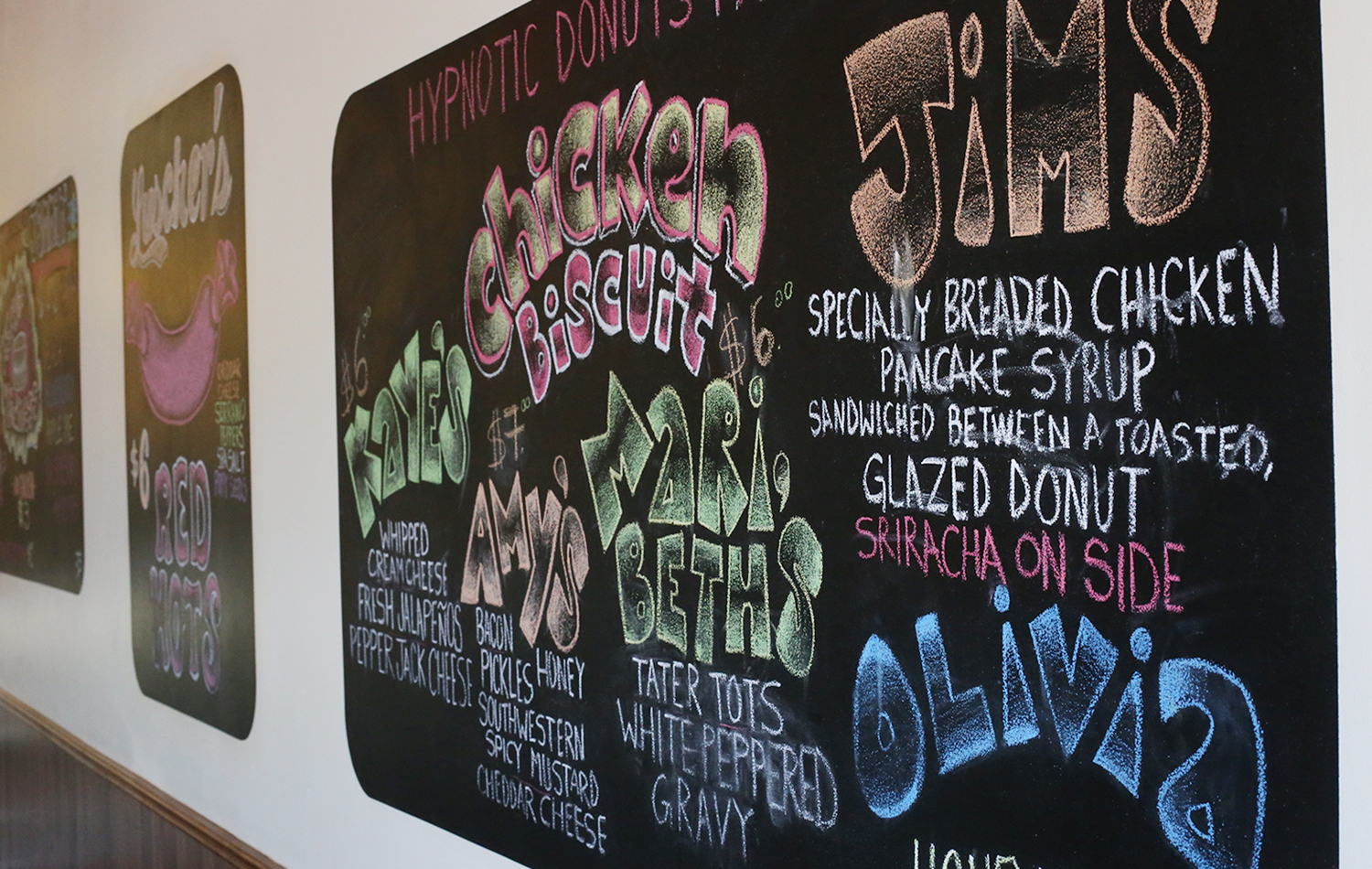 What about the future of the menu, how is it going to look different in the coming years?
I'm actually going to keep that one to myself, because I don't want people coming along and stealing my ideas. I'm not going to say that I'm the guy that invented artisan doughnuts, but we are the original in Dallas, no doubt. I've seen three or four companies try to imitate us within the last few years, and one of them didn't even know how to make doughnuts. They copied our exact menu, but they're not around any longer.

There is a place from Seattle that recently came into town, and I'm cool with that. They were established, they're just expanding their market, and they've been doing their own thing for 15 years. I respect the hell out of that. But when someone comes into the market, they see your success, and then they want to copy it. There are so many people in this industry that have helped me make this place successful, but they're all in different lines of work. I never went into Twisted Root and asked them how to open up a hamburger shop.

You guys are expanding to Denton now, how's that coming along?
We're building right now. We were supposed to be ready to go in January, but now we're looking at September. I'll say 2016 just to be safe. We wanted to build in a 1940s building, and it needed a lot of work. Basically, we had to take a shell of a building and turn it into something great. It would have been much easier to bulldoze the building and build up, but we wanted to preserve that 1940s architecture. 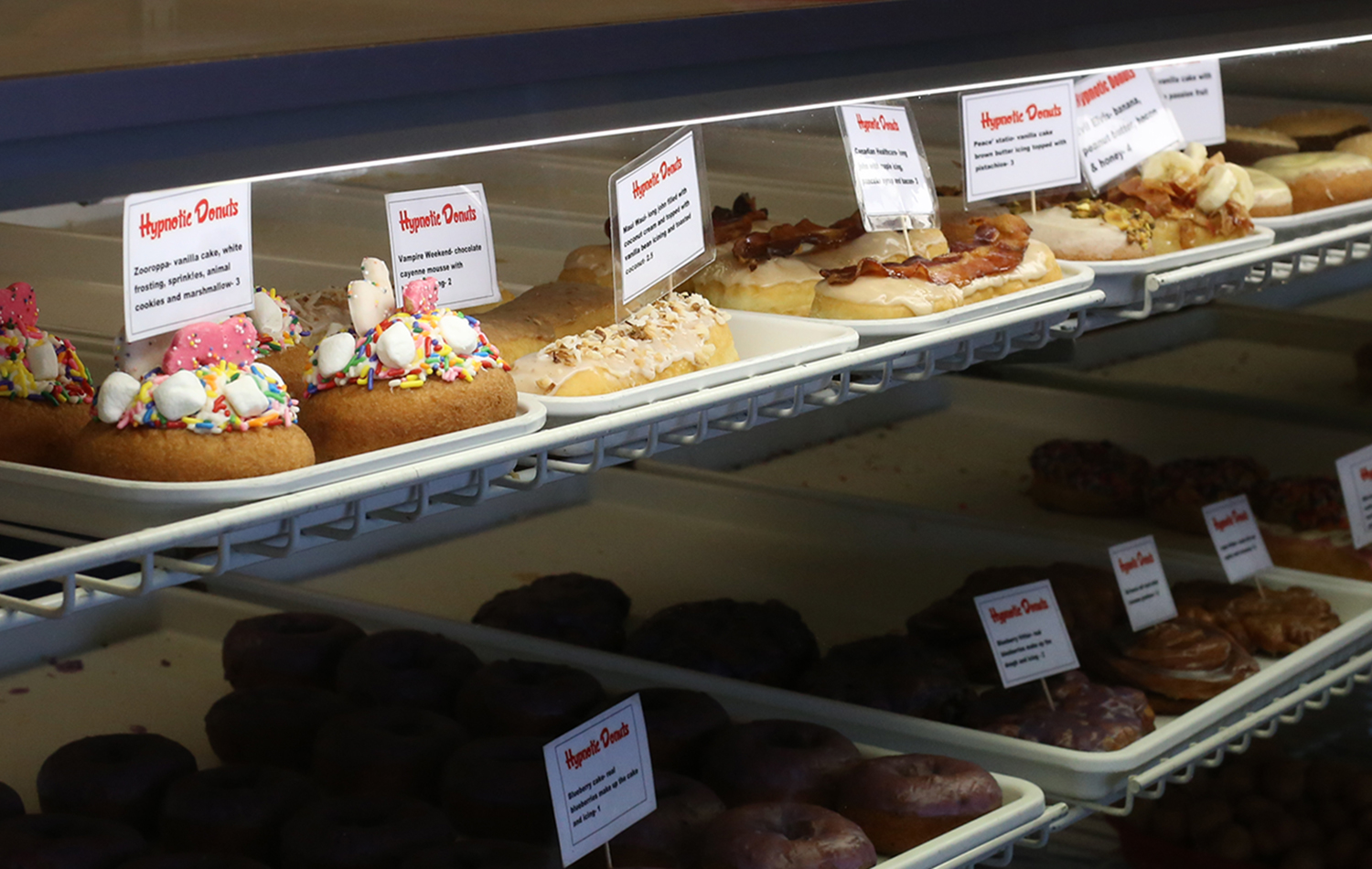 Has it been crazy trying to get a new location off the ground and run the original Hypnotic Donuts location?
It hasn't been too bad, but it's about to get nuts. Now that supposed completion from a contractor standpoint is July 15, it's about to get insane for me. I have great employees here at the Garland Road location that have made it really easy for me to step away and get this going. I'll actually be taking two of them with me to Denton, so it will be a little easier. Definitely not easy.

So you're going to be exclusively in Denton to get the new location off the ground? How long do you think that's going to take?
I'll be there at least a year, year and a half. I'll actually be living in Denton, but I'll be back from time to time to check on this place. My wife is actually staying here in Dallas to run this store, so we'll have a little bit of a split relationship for this year.

Are there any other plans for expansion in the future?
You know, we've got other concepts in mind, but we'll just have to see where it goes. The only reason we're expanding is because people want it. We have so many people from Denton, Colleyville and Lewisville who were coming to visit our shop, and a lot of them really sold me on the idea of going to Denton. Once I got out there and saw the landscape, I just fell in love with it.

You started out just selling doughnuts out of your car. Did you ever think that there would be two restaurants?
Two restaurants, no. Did I think that I could maybe do this full-time? I knew that I was going to give it a try. I didn't know if it was going to work, but I took two and a half years of logistical steps to ensure that it would work, but you can never guarantee that. I was confident that it would work, but what really got me to do this more than anything was that I didn't want to look back in ten years and regret not giving it a try. I had to know. 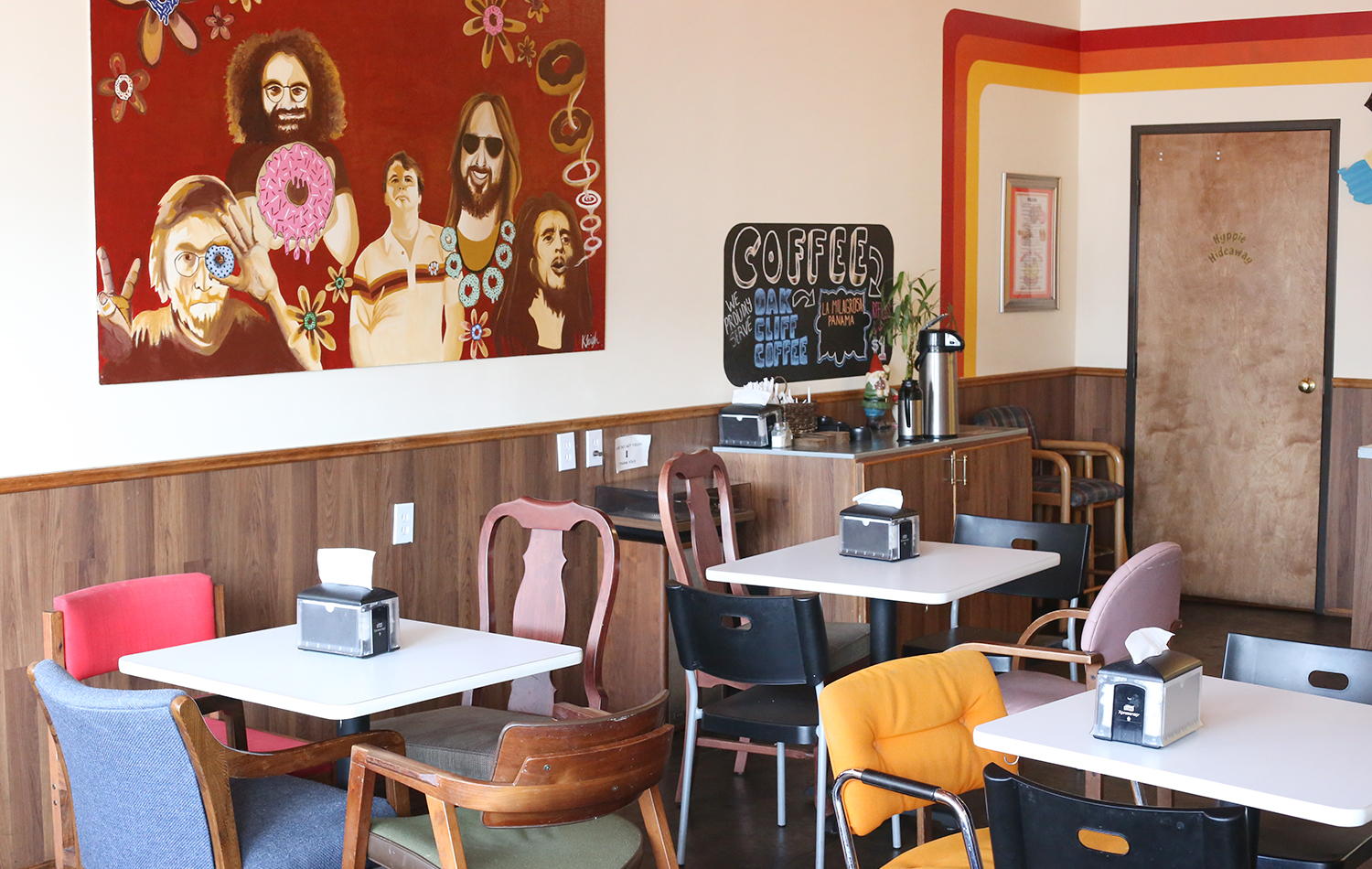 How have you seen the landscape of doughnuts in Dallas change since opening Hypnotic Donuts?
I don't know if it's really changed dramatically, but I think we've just brought a little more awareness to doughnuts, good or bad. I've done the research and I know that all the doughnuts in Dallas were the same before we opened up. Their products were all the same, even came from the same supplier. So I knew that even if we did a plain glazed doughnut, we could do something different. I still don't think the scene has changed a lot, but we've brought a different feel to it, not even just the doughnuts. We have a space where people come in and hang out, and you can just see that the overall atmosphere is different than your average doughnut shop.

Outside of what you guys are doing, what else do you think could make the local doughnut landscape better?
I will tell you this, I don't think me putting another Hypnotic Doughnuts three miles away in Highland Park or another area and saturating the market would help it. I think that would actually be worse. Being unique definitely helps influence the scene, along with spreading the word that there is something different.