How many corny dogs does Fletcher's sell in an average State Fair season? 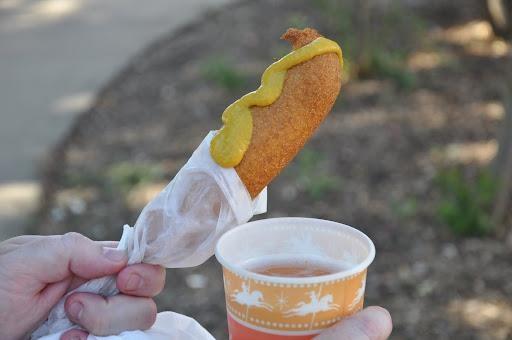 Getting your hands on at least one Fletcher's Corny Dog at the State Fair of Texas is practically mandatory. Before the fair opens its gates tomorrow for the 2014 season, you might want to brush up on your corny dog math.

Corny dogs sold annually: Fletcher's says that during an average 24-day fair season, their stands sell nearly 630,000 corny dogs. If you laid all those dogs end to end, they would stretch from Big Tex all the way to the Gulf of Mexico.

Hot dogs: 60,000 pounds of hot dogs are used by the corny dog stands during the fair.

Oil: It's not fair food if it's not fried food. To make the crispy corny dogs you crave, Fletcher's goes through 21,000 pounds of oil every season.

Condiments: Mustard is the only approved topping for a corny dog, which is probably why the stands need 1,500 gallons of mustard every season. While ketchup is frowned upon by corny dog purists, Fletcher's still uses 800 gallons of it each year.

Nutrition: Counting calories at the State Fair is a losing game, but you can demolish a couple of corny dogs without too much guilt — according to Fletcher's, each has only about 225 calories.