Going Deep Inside the 'Shameless All-Dongs Ecosystem' That Is Tallywackers

One man's first-hand account of beefcake and chicken-fried steak.

Share All sharing options for: Going Deep Inside the 'Shameless All-Dongs Ecosystem' That Is Tallywackers

"I'm gonna order for all of us," slurred the back-­tattooed, over-bronzed woman, who,
staggering next to me at the bar, resembled Dick Tracy-­era Madonna — if you squinted heavily. "Two Cuervo shots, two lemon drops, a Fireball, and two Coors Lights —­­ no, one Coors Light, and one Bud Light."

"Okay. You want 'em all chilled and dressed?" asked Brad*, the bartender, his trendy side-­shaved 'do evidently the only hair on his shirtless, well­-defined frame. His vacant eyes betrayed anyone's confidence that he would remember the order correctly (he didn't), but his I-am­-crushing­-this­-bartending-­thing plus an I­-am-­totally­-flaunting-­these-pecs-bro­ smile rendered those shortcomings moot. Brad is beautiful.

"They need to work on this," Madonna said, referring to the service; it was taking a while for beautiful Brad to make all her drinks. "Not that I'm complaining," she quickly clarified, eyes still locked on Brad, mouth hanging open; she stared lustily and with purpose. "I'm not in a hurry. Plus," she said, gesturing at Brad, "they got this part right."
­­­­
"The world­famous TALLYWACKERS," bellows the press release, "a bar, restaurant and
entertainment smorgasbord." Well, I've been, and I can tell you: that word, smorgasbord, I'm not sure it means what they think it means. Inside, they play pop music; in fact, seven different televisions simultaneously displayed the same music video: "Lady Marmalade — ­­ yes, that version of "Lady Marmalade." They have a stage too, ostensibly for experimental, tasteful performance art, though on this afternoon, it remained empty. And, ladies or gentlemen, if it's your birthday, the servers will serenade you lovingly, just like at Chili's ­­— except here, they also strip off their shirts in synchronization.
­­­­ 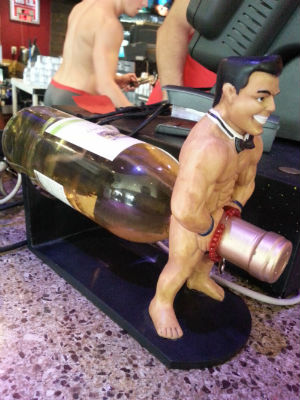 While Templeton the rat and I may have a different take on what constitutes a smorgasbord, perhaps our point of view is a bit outdated, a tad passe, a smidge square; after all, Templeton made his big-­screen debut when Charlotte's Web was released way back in 1973. Ten years later, the first Hooters opened. In 2005, the first Twin Peaks. In 2013, Big Tips Texas, a show about a real place really called Redneck Heaven, premiered on MTV. And now, in 2015, right in our own backyard, there is this, the first of its kind: Tallywackers, a place built specifically to ogle your beefcake while eating your birthday cake. To some, I'm guessing, this is what we talk about when we talk about progress: from breastaraunts to, as a friend put it, testeraunts. Suck it, patriarchy. It's your turn to twirl the tassles.

Speaking of, most of the (all­-male) waitstaff, bartenders and servers alike, obscure their nipples; that's Dallas law. How modest. They are adorned in red tanks bearing the Tallywackers logo — at least until 10 p.m., when all the shirts come off and an abbreviated menu of appetizers and cocktails are served. And they get credit for variety: some members of the staff are muscle­-bound, some aren't; some are tatted up, some aren't; some are clean­-shaven, some aren't. Scrawny dudes, brawny dudes, buff dudes, dad­-bod dudes, bears, cubs — ­­ if you and your friends like a diverse share of men, the good people of 'Wackers got you covered.

But oh, those shorts. All these guys wear tiny, skin-tight shorts, reminiscent of coach's shorts, if your coach was Christopher Meloni's character in Wet Hot American Summer and your sport was simply glistening. At Tallywackers, the alleged problem with these shorts ­­— protruding male genitalia —­­ is sort of the whole point. The shorts are short, Tyrion Lannister­-in­-hot­-pants short, and silver: the color of screens, linings, and tongues. The shorts are preposterous. The shorts are everything.
­­­­
"He's the hottest guy here," said a swarthy, braces-­wearing, Red ­Bull­-vodka-ordering young man sitting nearby ­­referring to Brad. While I was there, ya boy Brad tended bar for three consecutive hours wearing only these shorts. A shirt? Surely you jest. Don't insult Brad. Beautiful Brad ain't wearin' no shirt, chief. I ate a chicken­-fried steak while mere feet away he made two Red Bull­-vodkas, sporting a visible wedgie and little else, for his number one fan. The chicken-­fried steak, smothered in creamy white gravy, was easily the limpest piece of meat in my purview.

Braces and his mimosa­-sipping lady sidekick gawked at Brad and discussed the rest of the guys in lurid detail. "Straight. I think he's straight."

A manager helping restock the bar overheard them and his interest quickly piqued.
"Oh my god, are y'all playing 'Straight or Gay'?!" he asked. "That's my favorite game!"
And then he went down the line, pointing at, and identifying the sexual proclivity of, each guy: from servers waiting on their drinks to bartenders trying to figure out tabs and receipts. "Straight. Straight. Straight. Gay. Gay. Wait! Yeah. Gay. Gay. Straight. Straight!"

Braces and his tablemate shared a laugh, then further riffed on the relative fuckability of several employees. Brad, it goes without saying, remained Braces' favorite. Their conversation was the kind ­­— bawdy, backward, inappropriate ­— that, when had by a couple frat bros over a couple pitchers of pilsner at Hooters, can make one reasonably cringe or recoil. But, at that point in my journey, on my third hour at the bar, the sun improbably rising from the ever­present rain, I couldn't help but laugh along with them. It's still skeevy, sure, but it's got a certain novelty thanks to the shameless all­-dongs ecosystem ­­— and how happy those who work and drink here appear to be inside of it.

As I left, I passed by four or five people sitting near the entrance/exit, either waiting on a table, or on more friends, or maybe on a ride home. Two college­-age girls, clad in workout gear, sat on a bench, their noses firmly planted in their respective phones; on the opposite side of the wall, another couple stood, eyes fixated on their cellular screens, desperate for more of that hot Facebook action. I walked through the throng of beef, past the host table, out the doors, and never once did I see them look up.

Shirtless, bulging bartenders. Sexy servers. Synchronized birthday stripteases. Tallywackers: an entertainment smorgasboard. Maybe. Maybe not. Whatever the case, the people of Dallas have spoken: Much like practically everything else in the world, it's apparently still not as interesting as whatever's on your phone.

* Names have been changed.